Advertisement
The Newspaper for the Future of Miami
Connect with us:
Front Page » Education » University of Miami aims test program at Miami Beach shoreline

Written by Kylea Henseler on May 19, 2020
Advertisement 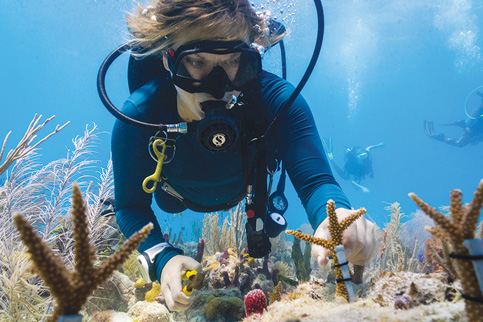 A University of Miami interdisciplinary team is seeking permits from the State of Florida and US Army Corps of Engineers to deploy three “hybrid” structures in waters off Miami Beach to gather evidence on how best to protect the shoreline from damaging wave energy.

This effort is part of the ongoing “Identifying, prioritizing, and validating green infrastructure approaches to enhance coastal resilience” study, which the UM team began in 2017. The study has received $350,000 from the university’s “U-Link” program over three years, and will continue to receive funds for the next three years from the National Fish and Wildlife Foundation.

Ms. Carrick, a research associate who is a project manager for the study, told Miami Today that her team’s goal is to find out how to best utilize a combination of manmade infrastructure and natural elements to protect the Miami coastline from wave damage and protect natural habitats.

The importance of this effort was explained by Mr. Lirman, an associate professor and principal investigator for the study. “Incoming waves produce coastal erosion,” he said. “That’s constant wear and tear on the beaches, and Miami spends millions of dollars replacing the sand after it gets washed away.”

Ms. Carrick explained that man-made structures such as jetties and breakwaters serve to protect coastal communities, while natural elements such as coral reefs and mangrove forests do the same. UM researchers have combined the two, and preliminary results from tests in the university’s wave simulator have shown that adding coral reefs to manmade protective structures such as breakwaters increases their efficiency.

“The breakwater, which is designed to reduce wave energy, did its job,” said Ms. Carrick, “but adding corals on top reduces an average of 10% to 15% more wave energy – that’s a 10% to 15% increased benefit in coastal protection.”

The next step for the team is to get permits for and deploy three different models of hybrid structures off Miami Beach to test their efficiency in the natural environment. Mr. Lirman said the structures will be stationed in waters about 12 feet deep between 69th and 79th street off Miami Beach. Each will be shaped differently and measure from 6 to 7 meters wide and 2 meters tall.

The researchers are utilizing $20,000 of the U-Link funds for this phase of the project, a sum the City of Miami Beach is matching.

The team hopes to discover which model is most efficient and then work with the city to scale construction to a level that will allow for meaningful protection.

“First we need to determine whether they work on small scales,” said Mr. Lirman, and then “start discussions with the City of Miami Beach to see if there’s an appetite for expanding.” According to Mr. Lirman, it would take “a couple miles” of submerged structures to make a significant difference.

“We have billions of dollars of infrastructure right next to the beach and the shoreline,” he said, “so the next step is to quantify the benefits of restoring the ecosystems.”

Other aims of the project include educating Miami Beach residents about the importance of protecting coasts and coastal property from wave-inflicted damage and creating understanding of the mitigating effects of the artificial reef .

Ms. Ramaprasad, a communication professor who is a co-principal investigator for the study, said many Miami Beach residents don’t see waves as a significant threat.

A survey of 102 Miami Beach residents, she said, found that on a scale of 1-5, the reported  knowledge of wave damage was barely above average at 3.3.