Advertisement
The Newspaper for the Future of Miami
Connect with us:
Front Page » Business & Finance » SeaVee Boats build new factory at right

Written by Kylea Henseler on May 19, 2020
Advertisement 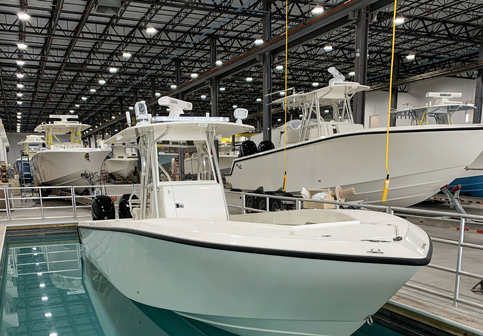 The new site, which replaces three smaller South Florida facilities that SeaVee had previously operated, was built by T.A. Builders in just under 18 months. Mr. Caballero said the new hub’s increased functionality has been essential in getting SeaVee back up and running safely and effectively after a virus-caused shutdown.

“We certainly expanded at the right time,” he said. “The efficiency of the factory allowed us to resume full operations almost effortlessly.”

After allowing factory employees to shelter at home for most of April, Mr. Caballero said operations have resumed in Medley with new safety precautions in place. SeaVee currently employs 315 persons, up from 220 in January 2019.

In total, Mr. Caballero said he believed about six weeks of production time had been lost, taking into account the time it took to slow down, cease and then resume activity. While SeaVee had originally planned to build 200 custom boats this year, he said the number could now range from 185 to 200 due to the time lost during the shutdown.

In contrast, SeaVee built 166 boats in 2019, primarily at its old facilities, and the new factory will be capable of producing 260 to 270 per year.

On the business end, Mr. Caballero said it was too early to tell how much the coronavirus would dampen sales. However, he said SeaVee’s made-to-order business model would protect the company from problems related to unsold inventory that affect many businesses during economic downturns.

“We have no inventory,” he said, “customers come to us.”

As of now, waiting lists for the various models of SeaVee boats range from 10 months to two years, with production times for each boat ranging from another 14 months to 2.2 years. “Even if we didn’t receive another order, which is not the case,” Mr. Caballero said, “our production would remain unfazed.”

SeaVee has already sold 56 boats this year, including 36 at the Miami Boat show in February. Mr. Caballero estimated another 20 or so would probably have been sold at the Palm Beach Boat Show, which had been scheduled for March before being cancelled due to Covid-19.

“So far we see it tracking as an ordinary year,” he said, “but I doubt at the end of the year it’s going to be so.”

Jesse Wells, who works for Info-Link Technologies, which specializes in market analysis for the outdoor recreation industry, said he also believed it was too soon to tell how the boating industry would be affected by current conditions.

“The market was going along at a reasonably good clip up until this point,” he said. “We don’t ever attempt to forecast what’s going to happen. We put the data out there and let people reach their own conclusions”

Each month, Info-Link produces detailed analyses of new and pre-used boat sales based on data from state agencies. According to Mr. Wells, time will tell how the virus has affected these numbers, as the state hasn’t yet released data for April and May.

March, the latest month for which statistics have been released, saw a 4.6% year-over-year dip in sales of new powerboats over 15 feet.