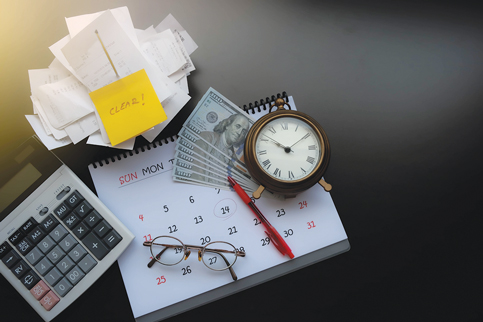 Banks issuing loans to businesses in need of aid during the pandemic are still awaiting more details on forgiveness. In the meantime, they’re taking smart steps to make matters easy once those Paycheck Protection Program (PPP) loans come due and are encouraging borrowers to do the same.

“Keep detailed records on how your funding is being used,” she said. “Perhaps consult with an accountant or your legal advisor to help ensure that your expenditures are in line with PPP legislation.”

“The Small Business Administration and Treasury have stated that it is the borrower’s responsibility to understand the rules and if the loan they receive qualifies for partial or full forgiveness or if they will be liable for paying it in full,” he said. “TD suggests business owners who receive a PPP loan check the [Small Business Administration] and Treasury websites frequently as they are regularly updated and consult their attorney or tax advisor for more information.”

Banks also aren’t responsible for calculating the precise amounts given to businesses but rather must only conduct “a cursory review” of the requested loan figures, said Lloyd DeVaux, president and CEO of Sunstate Bank.

That requires an examination of pertinent documents like the 941form, known the Employer’s Quarterly Tax Form, which includes details on employment taxes and social security paycheck reductions, among other fees.

Businesses must have been in operation at least before Feb. 15 to qualify for a PPP loan, but a year’s worth of paperwork helps best.

“If we have the 941 for each quarter from the last year, we can do a quick calculation and say, ‘That loan amount looks correct,’ and we [as a bank] are off the hook,” he said. “It’s supposed to be between the [Small Business Administration] and the borrower, not the bank, so if the bank follows the simple rules it’s supposed to follow, then the banks have no responsibility on this, and the loan is 100% guaranteed.”

The system seems to be working, though in some cases compliance monitoring has relied more on corrective than preventative measures.

Monday was the last day for entities to return loans wrongly apportioned to them through the program that in part helped contribute to the quick drain on the first round of PPP loans. (The program is now on its second round of loans totaling $310 billion, of which about $100 billion remains.)

Organizations that returned, or have committed to returning, errant loans include Harvard University, which received $9 million from the PPP; fast food chain Shake Shack, which got $10 million; and Ruth’s Chris Steak House, which returned $20 million.

But it’s not all big names. Earlier this month, two New England men became the first to be charged federally for fraud through the PPP after claiming to employ dozens of people at four separate businesses. No such businesses or employees existed.

“Every dollar stolen from the [PPP] comes at the expense of employees and small business owners who are working hard to make it through these difficult times,” said Assistant Attorney General Brian Benczkowski of the US Justice Department’s Criminal Division in reference to the case.

Mr. DeVaux said his staff has stopped PPP loan processes when key information is missing or when other questionable situations arise.

“One borrower used their social security number with a loan request, then did so with their tax ID and got both loans,” he said. “When we saw that we called the Small Business Administration to ask about that – ‘What do we do?’ – and they said, ‘You need to cancel that second loan.’ We did, and [they] opened an investigation.”

In addition to coming with a 1% interest rate, PPP loans include a fee paid to banks by the Small Business Administration based on the amount provided to businesses. For loans up to $350,000, banks receive a one-time fee of 5% of the total loan amount.

Banks also stand to gain customers. Many have opened extra accounts for new customers and long-term clientele for a practical reason: Keeping all PPP-related funding in a separate account provides clarity for all parties.

At Sunstate, Mr. DeVaux said, 75% of borrowers who hadn’t previously done business there have opened new accounts, though there’s no telling how many will become permanent customers.

However, that consideration is secondary to what many South Florida bank executives see as the principal point of their role in the PPP rollout.

Monetary and customer gains aside, the goal has been to help businesses here rebound during a crisis from which few were shielded and all have been affected.

“We’re doing this as a community service,” said Mario Trueba, regional president of South Florida for Iberiabank. “The major benefit to us is the camaraderie it’s helped to create. Our colleagues are thrilled to be involved – that they’re able to help so many people is beautiful to watch, and it’s all hands on deck to help with the PPP, for the right reasons – and the amount of thank yous we’ve gotten has been beautiful.”