Written by Jesse Scheckner on May 12, 2020
Advertisement 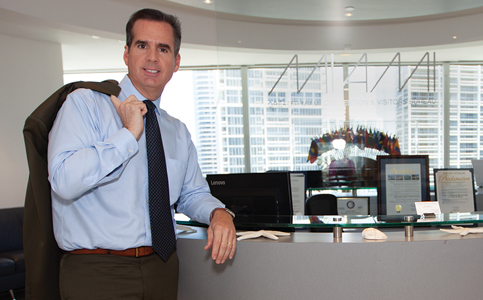 His role, developing a recovery marketing campaign to reattract interest here, was meant to be temporary. Twenty-six years later, he’s served in several increasingly demanding positions, from director of sales for Latin America to his current job as the bureau’s chief operating officer.

Over that time, he helped to market Greater Miami to the world in the aftermath of many other crises, from 9/11 and the gulf oil spill to Zika and several subsequent hurricanes. All, he said, have bestowed lessons that the bureau is using to inform its efforts now during the Covid-19 pandemic – a crisis that came just after Miami-Dade hosted the Super Bowl a record-breaking 11th time.

“We quickly pivoted [to develop] three pillars during our response – to  educate, mitigate and stimulate – and are playing a critical role in educating our partners in the hospitality industry and the meeting planners who have had to make changes based on what’s going on,” he said. “We became the clearinghouse to educate our city and county leaders, and whatever visitors were left, on what hotels are open, [which sounds simple but isn’t].”

That effort includes a slew of new initiatives that the bureau launched to help Greater Miami weather the effects of the virus and prepare the state’s top industry to recover once it’s passed.

Virtual Miami, which like the other programs is available on the bureau’s website, lets users enjoy 90 virtual experiences as a way to keep Miami in the minds of people all over the world and, as a bonus, to let residents visit places now that they otherwise can’t due to quarantine measures.

The bureau also partnered with Meals for Heroes, which pays restaurants to make high-quality meals that are delivered to front-line workers at hospitals and other high-risk areas.

Those are already online. Once hotels are allowed to reopen – hopefully in June, he said – it will trigger Miami Shines, the bureau’s recovery campaign.

“What we’re building, we want it to be flexible and broad reaching enough that it can easily be adopted for other purposes, and we’ve been working with our regional partners,” he said. “It’s a broad platform that will showcase not only the brilliance and radiance of our amazing natural destination but, arguably more important, the radiance and brilliance of our people, neighborhoods and places.”