Advertisement
The Newspaper for the Future of Miami
Connect with us:
Front Page » Arts & Culture » Coconut Grove Playhouse case heads to June hearing

Written by Abraham Galvan on May 12, 2020
Advertisement 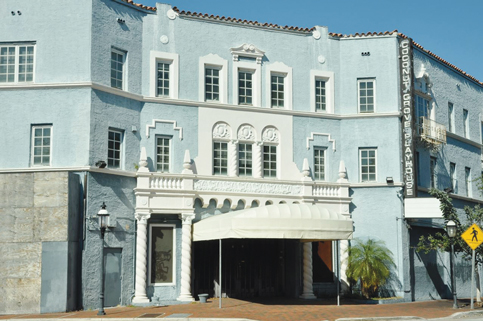 The future of the Coconut Grove Playhouse remains in the hands of the Appellate Division of the 11th Judicial Circuit Court with a hearing set for June 16 – if the pandemic permits.

With building permits and drawings set to begin construction at the playhouse property at 3500 Main Hwy., Miami-Dade County Department of Cultural Affairs Director Michael Spring said the county is ready to hear the ruling. Miami-Dade’s plan is to restore the front of the theater, demolish the larger auditorium and build a new 300-seat theater.

City of Miami Mayor Francis Suarez vetoed a 3-2 approval vote by the city commission back in May 2019 and later that month was upheld when the commission failed to get enough votes to override it, Mr. Spring said.

The Coconut Grove Playhouse was built in 1927 and designed by architect Richard Kiehnel of Kiehnel and Elliott, Miami Today previously reported. The playhouse, which is listed on the National Register of Historic Places, permanently closed in 2006, leaving behind a reputation as one of the nation’s leading regional theaters.

Originally planned to take over the artistic direction of the Coconut Grove Playhouse once renovated was GableStage at the Biltmore’s Joseph Adler, who died April 16 after a protracted illness, a press release from GableStage President and Board Chair Steven Weinger said.

“Joe (Joseph) Adler was a dear friend of mine and an icon in the arts community here in Miami,” Mr. Spring said. “I’m sadden that he will not be able to see this playhouse come to reality, but I promised him that we will get it done for him, just before he died.”

GableStage has a very strong board of directors who will make sure to continue Mr. Adler’s legacy and his great work for non-profit art organizations, Mr. Spring added. “I’m confident that they will be creating high-quality performances on stage soon when time permits.”

Staff, resources and decision-making are in place to find Mr. Adler’s successor, he said. “The board has not made a statement on who will replace him yet, but I’m sure they will make the announcement real soon.”

Mr. Spring said if the hearing is held as scheduled, a ruling won’t come right away. “All we can do right now, is just wait and hopefully, the ruling be on our favor.”