Advertisement
The Newspaper for the Future of Miami
Connect with us:
Front Page » Education » University of Miami students’ departure leaves a gaping hole 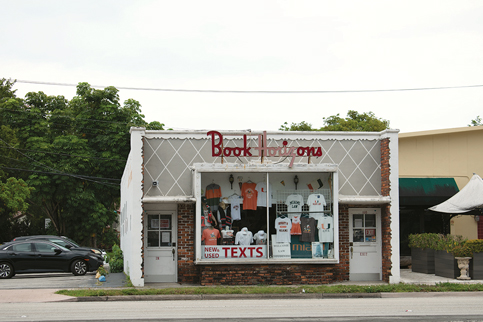 Will Sekoff of Book Horizons, a family-owned and managed business operating since 1953, says things haven’t been the same since the University of Miami students left the Coral Gables campus.

In an email exchange, he said he’s are hopeful school will be back in the fall.

“We miss the students – not just because they are our customers – but the energy and sense of community they bring. It is not the same without them,” he wrote.

At a time when textbook sales have been dominated by online and big-chain retailers, Book Horizons prides itself on a business model that centers on topnotch customer service. Mr. Sekoff also said that as a small family-run business, the store is able to make decisions quickly and adapt. While the store is closed, staff are taking phone orders and offering curbside pick-up by request.

But he acknowledged the uncertainty stemming from the current pandemic.

“We’ve seen a lot through the years,” Mr. Sekoff wrote. “Hurricane Andrew for example hit right at the start of the school year – but this is different.  It’s filled with so many unknowns.”

Covid-19 has upended educational institutions, including the University of Miami. Now, businesses in Coral Gables that cater to the university’s students are finding that that reliable clientele has been decimated.

The university transitioned to online learning March 23 and has announced all summer courses will be offered remotely.

In a video message, UM President Julio Frenk remained optimistic students would be returning to campus in the fall. Dr. Frenk, the former minister of health for Mexico who has lived through four pandemics, said the university will be reimagining spaces and making testing widely available for the return of students.

“Our expectation is to begin our fall semester on time and on campus so long as we can do so safely, and we look forward to welcoming you back,” he wrote.

According to the university’s office of media relations, just over 4,000 students were living on campus prior to moving to virtual learning. As of last week, about 250 students remain on campus.

While it’s hard to gauge how many UM students are still in the area, what’s known is that the majority of UM students aren’t from Florida. CollegeSimply.com found that just 26% of the more than 17,000 UM students are in-state, whereas 58% are from out of state and 14% come from other nations.

Mark A. Trowbridge, president and CEO of the Coral Gables Chamber of Commerce, said the University of Miami students are a huge consumer base in the city. Right now, he said, would typically be a profitable time for the city, as families come into town for graduation. Normally at this time, hotels are booked, restaurants see plenty of reservations and local businesses help students get ready for their big day. But all that business has been suspended.

He’s heard from landlords who are concerned students won’t be signing leases for the fall just yet, as the upcoming school year remains murky.

If the university suspends its fall semester or shifts to strictly online, Mr. Trowbridge said it could be disastrous for Coral Gables. He emphasized that it’s not just the students who frequent Coral Gables businesses; the faculty and staff are also part of the city’s consumer base.

“I think the university is a central figure and player in everything we do in the community,” he said, adding that “looking at UM, I always tell people they are not in our backyard, they are in our front yard.”