Advertisement
The Newspaper for the Future of Miami
Connect with us:
Front Page » Business & Finance » Miracle Mile gears for a new bounce-back 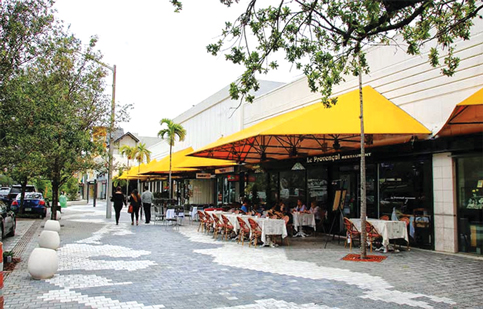 Even before the Covid-19 health crisis crippled the economy, from a global to a hyper local reality, Miracle Mile – the commercial soul of Coral Gables – was dealing with vacant storefronts and other challenges.

But even in the face of unknown factors brought on by the pandemic, business leaders and officials are striving to proclaim positivity.

The message is: The long-term prospect for the City of Coral Gables is bright.

Miami Today reached out with questions about the city and Miracle Mile to Mr. Kerdyk and Sally Baumgartner, a senior commercial realtor with his company.

They put together a short report that covers where they’ve been, where they are and where they think things are going in the Miracle Mile corridor.

Above and beyond Covid-19, two other factors have a bearing on the success of Miracle Mile: the years-long Streetscape Project and the pending arrival of The Plaza Coral Gables, a 2.25 million square foot development under construction on Ponce de Leon Boulevard, and its projected 161,000 square feet of retail space.

Mr. Kerdyk’s public service has included several terms on the elected city commission, and he has served as vice mayor. As a city commissioner he was onboard when city leaders put together the plan to remodel Miracle Mile; the Streetscape Project.

“We wanted a more free flow of pedestrians, to allow restaurants and their patrons to spill out onto the sidewalks. We viewed it as a necessity and I still think it was the right move,” Mr. Kerdyk said.

However, it was a struggle to get completed on the initial timeline, he noted.

“It hurt existing retailers there… and any possible tenants passed on opportunities here seeing the construction and how long it was taking,” he said.

Between the end of construction of the multi-million-dollar Streetscape and the onset of Covid-19 restrictions, came a resurgence in the businesses along the famous street, the firm reported.

When the city undertook the remodeling project in 2016, business along Miracle Mile was “chugging along” nicely. There were some vacancies but not enough to really impact the 650,000 square feet of retail space that runs from Douglas (Southwest 37th Avenue) to LeJeune roads (Southwest 42nd Avenue) and comprises the Central Business District of Coral Gables.

But the two years that the project was underway took its toll on many of the long-time tenants on the street, said Ms. Baumgartner.

Rental rates dropped, significantly when the Streetscape Project continued past its expected completion. A number of merchants were unable to hang on and vacancies were not being filled for the two-plus years the project went on, she said.

Some landlords/owners realized that holding the tenant was more important than raising the rent and so were able to retain tenants by working with them, often at a loss. Restaurants kept the street going during that time. But when the Mile reopened with its new look, more than 25% of the stores were vacant, according to Ms. Baumgartner.

Currently the street has a vacancy of 15% with 26 vacant stores. At the beginning of this year, five new merchants announced they were coming to Miracle Mile – and that was in January. Rental rates have not entirely recovered but they have bounced back from the 2018 lows.

Ms. Baumgartner said, “Now, in the aftermath of Covid-19, all bets are off. We as yet don’t know what the costs will be to ‘sanitize’ retail establishments and keep social distancing in practice. More than a third of the businesses on Miracle Mile are restaurants.

“From installing Plexiglas screens for cashiers and maître d’s to the removal of 50% of their seats and/or having specific ‘seating times’ to keep the crowds and wait times lower, they are all going to have to revise their business plans, and either raise their prices or reduce their overhead,” Ms. Baumgartner wrote in the status report.

Mr. Kerdyk said, “I don’t know anyone suffering more than restaurateurs and smaller retail … they’ve been hit hard.”
Federal stimulus programs, adopted in response to Covid-19, have helped about 30% of the restaurants pay their rent, he said.

Mr. Kerdyk said property owners are accepting the reality that changes need to be made these days in order to move forward in positive ways, from reducing rents to renegotiating leases and so on.

“Most property owners get it or are starting to get it,” he said.

Ms. Baumgartner reported, to keep their properties rented, the property owners are getting creative.

Some are reducing rents in the short-term and back-end-loading the leases, extending the term to recoup their losses. Others are renegotiating leases, doing percentage deals so as the business comes back, so does the rental rate.

“There are as many permutations of deals as there are classes of tenants. Restaurants are not like fitness facilities … bridal shops, are not like electronics stores. Every tenant’s needs are unique and the landlords’ willingness to work through this difficult situation will be the biggest factor in the success or failure of the future of these businesses,” said Ms. Baumgartner.

In terms of the completion of The Plaza project, it certainly will have an impact on Miracle Mile’s merchants and its popularity, but not necessarily in a negative way.

“With The Plaza as the magnet, thousands of people will likely be drawn to Miracle Mile – while they’re here. With the right tenant mix and a little patience, Miracle Mile will hold its own,” said Ms. Baumgartner.

While it is anticipated that the stores at the Plaza will be high-end retailers, more in line with those found in Merrick Park, the firm said it doubts major retail chains will locate there.

“And with the announced bankruptcy of Neiman Marcus, it is unlikely that we will see any major department stores leasing space either. The mix of tenants will probably be skewed towards restaurants and entertainment to cater to the hotel, the residences in the complex and the tenants in the adjacent 474,000 square foot office building,” she said.
An example of a current commercial offering from the Kerdyk firm includes 4,440 square feet at 2619 Ponce de Leon Blvd.

“High visibility retail opportunity with 50 feet of frontage on Ponce de Leon Blvd. This retail is located directly adjacent to ‘The Plaza’ and walking distance to the Mile. Retail priced at $39 PSF NNN with expenses of $12.25 PSF.

“Space is comprised of two retail Bays of 2,440 SF each which can be combined for a single user … This is a hot area undergoing explosive growth in a highly attractive area of the Gables,” the listing states.

Better days are ahead for Coral Gables, said Mr. Kerdyk.

“The long-term prospective for the city, Miracle Mile corridor – the heart of the city and retail spine – is very bright.”
He added, “We are building additional housing and apartments in the downtown area, median household income is approaching $100,000, we’ve got 6.5 million square feet of office space, 150 multi-national companies and 20 consular offices… It’s a good quality of life for our business community and our residential community, and ultimately Miracle Mile will prosper.

“We basically have everything one needs in the City of Coral Gables,” concluded Mr. Kerdyk.

She recognizes these are challenging times but said the BID is watchful of its partners and looking for ways to help.
“Supporting our businesses during this uncertain time is our priority. We’re promoting delivery/take-out, online shopping, and virtual experiences via our website, shopcoralgables.com and our social media platforms under @shopcoralgables,” Ms. Amador told Miami Today.

“New content is created and shared on a daily basis, as keeping consumers informed and engaged with what our downtown businesses are up to is critical.

“Plus, our Thursday weekly consumer newsletter is still being sent to over 30,000 subscribers, highlighting the new types of experiences customers can enjoy from their favorite Downtown Coral Gables merchants,” she said.

Several restaurants are providing take-out/delivery specials, along with curbside pickup options. The full list, which is updated daily, can be viewed at shopcoralgables.com.

Also, via the BID website, “many retailers are offering amazing online shopping deals, and our cultural institutions are staying engaged by offering enriching experiences while you stay home and stay safe,” she said.

A few business owners are sharing videos online about what they’re doing to keep people safe, plus sharing facts, recipes, and information. Some of the businesses include Bellmont, Salumeria, Wolfe’s Wine and more.

Ms. Amador said, “Additionally, the BID has been proactive in keeping the business community informed of the latest developments and regulations. Our staff researched and identified opportunities to assist businesses during this time. The BID hosts a page with the available resources ‘Small Business Guide to the CARES Act + Other Resources’ on our website.”

3 Responses to Miracle Mile gears for a new bounce-back