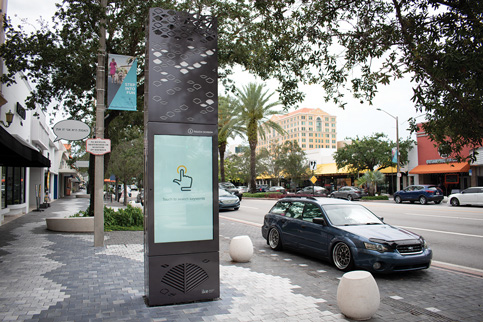 A deal between the City of Miami and a firm that will install interactive smart kiosks on city sidewalks was OK’d last week after the city administration negotiated more favorable terms for the city’s cut of the advertisement revenue.

The Miami city commission unanimously approved a resolution authorizing the city manager to negotiate and execute an agreement with IKE Smart City LLC for the firm to install and operate the devices. The city was going to piggyback off the agreement of the City of St. Louis, MO, with IKE, but at a meeting earlier this month, commissioners said the city should negotiate its own deal after realizing the city’s cut would be from the net advertising revenue, not gross. They tasked City Manager Art Noriega with negotiating new terms with IKE.

Under the approved agreement, the city will receive 40% of the gross advertising revenue.

The touch-screen kiosks’ amenities have been touted as a benefit to residents and visitors, providing real-time transit information, mapping to points of interest and city information. The devices are also to feature free wi-fi, environmental sensors, capability transmit emergency messages and a photo booth option.

Last week’s discussion of the smart kiosks centered on a carveout of Bayfront and Maurice A. Ferre parks and sidewalks immediately next to the parks, which was requested by Commissioner Joe Carollo. Mr. Carollo, chairman of the Bayfront Park Trust, said he would negotiate with IKE or other firms for the best deal for the trust.

Before the legislation was amended at Mr. Carollo’s request, the trust, along with the city’s community redevelopment agencies, business improvement districts and the Downtown Development Authority, stood to earn 25% of the advertisement revenues from kiosks within their boundaries, with the remaining earnings going to the city’s general fund.

Mr. Carollo argued the trust, unlike the other agencies, actually manages the land within its boundaries. He stressed that due to the pandemic, the trust, which operates independently without city funding and has directed revenue surplus back to the city’s general fund, will be in a financial bind. He said the trust will not be able to generate funds from activities and concerts held at Bayfront Park for the foreseeable future.

Commissioner Manolo Reyes aired some concern with Mr. Carollo’s proposal, saying “Bayfront Park or DDA or anybody keeping all the revenues without sharing it with the general funds is a concern that I have.” However, he ultimately voted for the legislation.

As the agreement states, when no user is engaging with a kiosk, one out every eight advertising spots must show direct content to be provided by the city. If the kiosks are being used, a minimum of 66% of the screen area must be occupied by directed content. The kiosks cannot show political, sexually explicit or tobacco advertisements.

Commissioners had already approved legislation enabling installation of the devices. City Attorney Victoria Méndez has stated on several occasions that the deal with IKE is non-exclusive, so the city could make deals with other kiosk operators.

The kiosks have met pushback. Attorney Thomas R. Julin in a letter submitted to the record and during public comment argued that his client, First American Telecommunication Corp., which has public payphones in the city, has not been allowed to upgrade its own devices to allow digital advertising. He also said the city cannot provide an exclusive contract and was concerned the procurement process was geared toward one client.

A subsidiary of Orange Barrel Media, IKE has kiosks throughout the country, including the neighboring City of Coral Gables. Three of the kiosks can be found on Miracle Mile and another is available on Giralda Plaza.