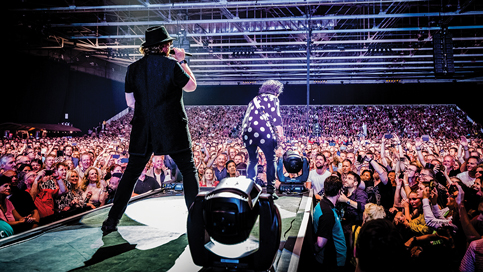 Before Covid-19 enveloped the world, Miami Beach was concerned with establishing activities that would help change its rowdy image during spring break.

Jerry Libbin, president and CEO of the Miami Beach Chamber of Commerce, introduced the festival, to be called the North Sea South Beach Music Festival. He said the chamber was approached by the producers, Curaçao-based Fundashon Bon Intenshon and Live Nation’s Mojo Concerts, about bringing the festival to the Beach in March 2021.

During his comment, Mr. Libbin highlighted the achievements of Gregory Elias, the founder of Fundashon Bon Intenshon, including producing the famous Rolling Stones concert in Havana and financing festivals like Curaçao North Sea Jazz and Holland International Blues. According to Latin Times, Mr. Elias is a corporate lawyer from Curaçao.

“If they meet their projections, they expect to have a financial loss of $2.255 million in year one,” Mr. Libbin said. “They understand as producers of major events that it takes four to five years to even break even, and they’re ready to make that kind of investment in our community.”

Mr. Libbin said the producers will pick up the costs for staging, marketing, sales, talent acquisition, room nights for staff and talent, and safety and crowd control within the gated area.

They’re asking the city to forgo site rent and costs of sanitation, police and fire, which he said the city normally pays during spring break.

Producers would also offer 250 tickets a day to senior citizens and 500 a day to children under 15 who are accompanied by a paying adult.

A ticket for the event is projected to cost $150 and the event is expected to draw 15,000 festival goers a day, said Heather Shaw, the city’s assistant director of tourism and culture. She said that while vetting the producers, she did not find anything negative about them and mentioned that the Greater Miami Convention & Visitors Bureau submitted a letter of recommendation.

Mango’s Tropical Cafe owner David Wallack spoke highly of Mr. Elias. He said he and Wendy Kallergis, president and CEO of the Greater Miami and the Beaches Hotel Association, had been discussing the idea of a mega-festival with top talent taking place in the Beach for the better part of a decade, and said Mr. Elias has the talent, resources and expertise to make it happen.

“Now even in circumstances where the timing of this event can be an incredible blessing for our entire city in that it would serve as a recovery renaissance concert as well to just lift the city into almost the days of yesteryear in a way that it’s never been done before,” Mr. Elias said.

Commissioners were supportive of the festival but raised several questions and suggestions. Michael Góngora said he was interested, and recommended festival producers hire as many locals as possible and look to affiliate with the South Beach Jazz Festival. Mark Samuelian said the administration should look at the benefits to the city and the potential for the festival to adversely affect the South Beach Jazz Festival.

City Attorney Raul Aguila cautioned against giving conceptual commission approval without his office properly vetting the festival. However, Mr. Libbin said the producers, short of a contract, need a firm commission commitment so they can get the ball rolling and start booking talent.

Mayor Dan Gelber, sponsor of the legislation, amended the resolution to emphasize that approval of the event was subject to successful negotiations with the city. City Manager Jimmy Morales said he would aim to have a final agreement ready for the May 13 commission meeting.

Founded in 1976, The North Sea Jazz Festival is a yearly festival in the Netherlands that has drawn jazz greats including Miles Davis, Ella Fitzgerald, Nina Simone, Stan Getz and Herbie Hancock, and contemporary acts such as Kendrick Lamar, Solange and John Legend.

The Curaçao offspring was created in 2010, and has attracted acclaimed acts such as Prince, Stevie Wonder, Sting and Alicia Keys.

However, this year’s Curaçao North Sea Jazz Festival has been called off. The website reads: “For this internationally competing event, the organizers need at least two world-class acts, preferably headliners that have not performed at Curaçao yet. In the past months it has become clear such acts are not available for this particular period.”