Advertisement
The Newspaper for the Future of Miami
Connect with us:
Front Page » Communities » Pandemic puts Coral Gables power line burial on hold 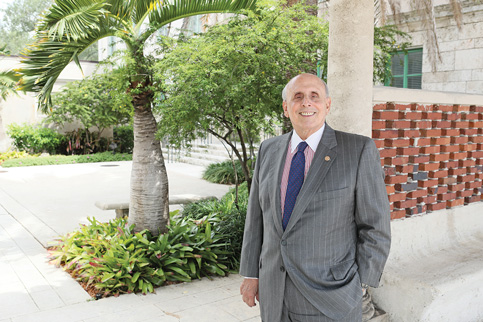 A ballot question asking Coral Gables voters whether they want to bury power lines across the city for a substantial cost won’t likely come until next year due to coronavirus closures, city officials say.

The city was just about to begin community engagements to gauge public interest in the undertaking, followed in April by a city commission workshop to refine plans, Mayor Raúl Valdés-Fauli said.

“We had to cancel that, of course,” he told Miami Today.

Coral Gables has repeatedly discussed undergrounding power lines since after Hurricane Andrew in 1992, citing a multitude of aesthetic, safety and reliability advantages. Doing so would require the cooperation of Florida Power & Light (FPL) and come with a hefty price tag.

Ramon Castella, vice president of Stantec Inc., told commissioners the city could bury the lines for about $25,000 per property within the next two years, with financing occurring over 20 years at about $1,500 yearly over that term.

The project, he said, would affect roughly 12,000 single-family homes, 2,000 multi-family units and 1,600 commercial properties north of Sunset Drive, with a significantly smaller impact south of that thoroughfare, where many lines are already buried.

Last week, the mayor said the figure Mr. Castella provided was “one of the estimates” given to the city, which is now accepting bids from multiple proposers, and was more of “a ballpark figure” about 20% higher than what it would it would actually cost.

Even so, he said, “it’s still a substantial amount by house” that may be prohibitive for some of the city’s less well-to-do residents.

“These lines are horrible, a blight on our neighborhood,” he said. “but it’s a matter of cost, and some people are on fixed incomes [or have] more pressing issues.”

Having a firm figure is critical to future stages of the project, particularly when the city begins to work with FPL on a path forward, Vice Mayor Vince Lago said.

“That cost is borne by all parties – the residents, FPL and the city – and right now that cost hasn’t been solidified,” he said. “It becomes more accurate once we engage FPL to provide us with a real construction number, and that takes about six months.”

That timeline makes August an impossible date for a citywide referendum and the November general election ballot an unrealistic target, he said, meaning the soonest the question could be posed to voters is on the city’s April 2021 election ballot.

“Even with that being said, it’s still incredibly tight,” he said.

Provided residents approve the project and the city and FPL develop a workable arrangement, different financing models may be available to residents based on their individual needs and wishes, City Attorney Miriam Soler Ramos said.

“Based on what we’ve seen from other municipalities, we could have some pay up-front and have less of a payment [later] or have down payments or a series of payments,” she said. “There’s many ways they can choose – a lot of consideration – but that has not been set by the commission yet.”