Advertisement
The Newspaper for the Future of Miami
Connect with us:
Front Page » Top Stories » Bids sought to raise Tamiami Trail, restore Everglades 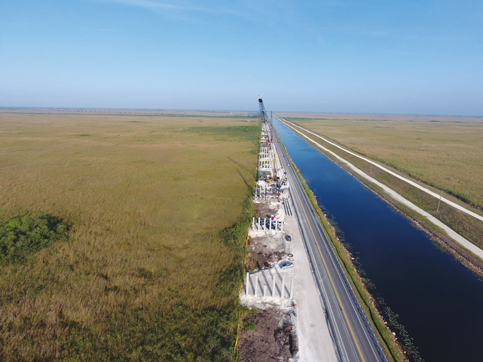 A long-sought project to raise the Tamiami Trail as it crosses the Everglades between Miami-Dade and Florida’s West Coast moved ahead last week as Gov. Ron DeSantis announced the upcoming advertisement for a contract to handle the project’s next phase.

The work was to be advertised this week as a low-bid, design-build project allowing qualified contractors to bid on raising 6.5 miles of roadway on the Tamiami Trail, which is US 41.

The Florida Department of Transportation is to choose the design-build team during the summer, with work expected to start this year.

The project runs through Everglades National Park and will be managed by the Florida Department of Transportation in coordination with the National Park Service.

“I have worked diligently with the Florida Department of Transportation and the National Park Service to accelerate this critical infrastructure project,” said Gov. DeSantis in a press release. “The Tamiami Trail project is a key component of the Comprehensive Everglades Restoration Plan. Elevating the trail will allow for an additional 75 billion to 80 billion gallons of water a year to flow south into the Everglades and Florida Bay.”

Old Tamiami Trail is a historic highway that was built across the Everglades to connect Tampa and Miami in the late 1920s. Its construction disrupted the natural sheet flow of water south through the Everglades from Lake Okeechobee to Florida Bay.

By raising Tamiami Trail and installing a series of short bridges, the project aims to help restore the ecologically important historic sheet flow of water south through the Everglades.

This is the last of three related projects.

In 2008, the Army Corps of Engineers built a one-mile bridge at the eastern end of Tamiami Trail and in May 2019 Florida Department of Transportation completed Tamiami Trail Next Steps Phase 1, which included removing the existing roadbed and constructing two new bridges from east of the Osceola Camp to west of the Airboat Association of Florida.

Tamiami Trail Next Steps Phase 2 is expected to be completed by 2024.

Federal funding to complete Phase 2 was announced last year by US Transportation Secretary Elaine Chao, who advised state officials that $60 million would be provided to the National Park Service for elevating the 6.5-mile section of the roadway.

“Combined with the $40 million I requested from the Florida Legislature, the project is now fully funded,” Gov. DeSantis tweeted at the time.

The Tamiami Trail crosses the Everglades and forms part of the northern border of Everglades National Park. Environmentalists say it has dammed the natural flow of water from Lake Okeechobee through the Everglades to Florida Bay.

“The water crisis facing the Everglades is really two-fold,” Everglades Foundation CEO Eric Eikenberg said last year in a prepared statement. “At the northern end of the Everglades, excess water flowing into Lake Okeechobee has forced massive discharges of algae-causing water into the Caloosahatchee and St. Lucie Rivers. Meanwhile, in the southern Everglades, the lack of fresh water impacts wildlife and destroys critical habitat. In Florida Bay, it is ruining the delicate saltwater balance, killing seagrass habitat needed to support world-class recreational fishing in the Florida Keys.”

The Everglades Foundation said construction of two elevated bridges has helped the water flow, but the additional federal and state money will go toward raising a section of the roadway between the bridges and installing culverts.

The funding has been pushed by members of Florida’s congressional delegation and state officials.

“Without this critical funding to raise the road, recently authorized projects to the north, including the Central Everglades Planning Project and the Everglades Agricultural Area Reservoir would not be able to achieve their full restoration capabilities,” US Sen. Marco Rubio wrote last year. “Everglades restoration is absolutely necessary to ensure the environmental sustainability and economic vitality of one of the most dynamic regions of our nation, and I will continue to work collaboratively across federal, state, and local government to address any roadblocks slowing down our progress.”

As governor in 2013, Sen. Rick Scott proposed $90 million in state funding to keep the federal elevation work on schedule.