Advertisement
The Newspaper for the Future of Miami
Connect with us:
Front Page » Opinion » We can’t have economic recovery without visitor recovery

We can’t have economic recovery without visitor recovery

In January, as some Florida legislators maneuvered to stop state spending to lure visitors on the theory that people would come to Florida no matter what, we suggested that rather than zero out tourism the state should double its investment.

As is now clear we underestimated – by a lot.

Air travel has been slashed with 60% of commercial airlines grounded, the cruise industry crushed with virtually no sailings, hotels crippled, many restaurants closed. The post-virus period, whenever it starts, will need major investment to rebuild the state’s number-one industry, visitors.

How important is it? Before the pandemic, one of every eight jobs in Florida, 1.29 million in all, were in what is broadly hospitality. In Miami-Dade, it was one job in nine, 152,200 of them. Florida can’t have economic recovery without visitor recovery.

The state must trumpet loud and clear – once it’s true – that it’s safe to fly to Florida, stay in our hotels, eat at our restaurants, visit our attractions and our beaches and return to normal. 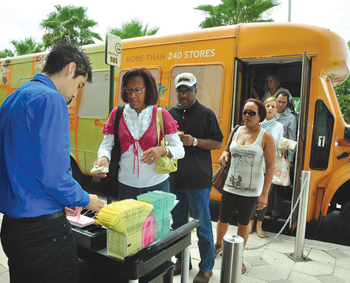 Visitors arrived by bus to shop at Dolphin Mall. The economy needs them back.

It won’t happen on its own. Major promotions will be vital. They cost money.

Visitor industry leaders have warned the legislature for years that a strong promotional fund would be needed to battle unanticipated damage to the industry. Such disasters have ranged from oil spills to hurricanes to major economic downturns. After the 9/11 terrorist attacks it took three years for airline capacity to recover and eight years for airfares to rise back to where they had been. Tourism marketing was always crucial in the recoveries.

But nobody envisioned a pandemic.

Last year, the legislature cut funds for our tourism agency, Visit Florida, from $76 million to $50 million. This year, the same legislators tried for zero. A budget proposal released Jan. 28 would have closed Visit Florida. Legislators relented in early March as devastation from Covid-19 was already appearing. They left $50 million in the budget and the agency in existence into 2023 – supporters had asked for 2028.

With most Floridians in stay-at-home mode, this month Gov. Ron DeSantis quietly signed the bill that keeps Visit Florida alive.

The Greater Miami Convention & Visitors Bureau also avoided disaster – some legislators tried to yank away much of its tax funds. The bureau right now is helping prop up the industry with its Miami Eats and its Meals for Heroes Miami programs, its VirtualMiami web portal for future visitors, its MiamiSalutes offers from the visitor industry and more. When it’s safe, the bureau will have to invest far more to rebuild visits to Miami.

Every bit of state and local government will be under intense financial pressure in months and years ahead. A collapsed economy isn’t magically reborn with the wave of a wand. Business won’t just snap back on its own.

That will mean that a faction of the legislature that has firmly opposed helping businesses on grounds that they can help themselves must do a 180-degree turnabout. Money will have to be found to help jumpstart all industries.

Florida tourism is pivotal. It will battle, as always, every other tourist-friendly destination in this region of the world for the visitors of the future. Even the market that was firmly Florida’s can be wooed by others. Every destination will spend heavily on marketing.

Frankly, Florida has been outspent for years by the Caribbean and others. We’re going to need it more than ever, far more than $50 million.

Needs in other Florida industries will also be overwhelming. The legislature and the governor are going to have to dig deep to fund recovery. The budget as drawn won’t cut it. No doubt Tallahassee will act.

Florida should plan right now to add to its visitor industry arsenal. The $50 million now is too small. So is the $100 million we suggested in January. We’re talking about 1.29 million jobs. Aren’t they worth at least $100 per job in state funds to secure them?