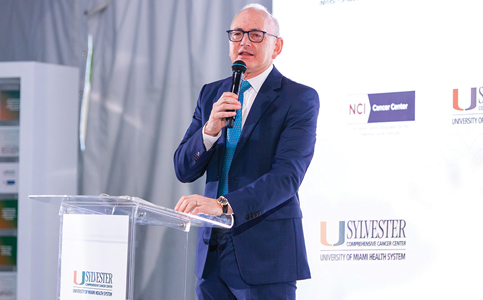 When Dr. Stephen Nimer first took over as director of the University of Miami’s Sylvester Comprehensive Cancer Center in May 2012, he told Miami Today that although the center was well-respected, recruitment there was a challenge.

For that and other reasons, including securing greater funding, he shortly thereafter started work on earning the center a rare designation from the National Cancer Institute (NCI). Just 71 centers in the country today hold the designation.

And Sylvester is now among them. In July – after 7½ years of work, including recruitment of 168 new faculty members – the center became just the second in Florida and the only one in Miami-Dade to become NCI-designated.

“It’s a huge accomplishment,” he said. “We’ve built such great programs here, and there’s a real buzz among the medical community about the University of Miami. In 2012, we had to recruit people and ask them to take a chance on us. Fortunately, many talented people did. Now more people want to come and work with us than we can accommodate.”

Dr. Nimer’s interest in medicine began late in high school, but it was in his second year of medical school, under the tutelage of Dr. Janet Rowley – the American geneticist who first identified the genetic translocation that caused leukemia and other cancers – that he decided on what he wanted to make his life’s work.

After his internship, residency and fellowship at UCLA, where he started studying the molecular biology of leukemia, he went to Memorial Sloan Kettering Cancer Center in New York City to launch a program and lead research in hematological cancers.

“I then became the Alfred P. Sloan professor, ran my laboratory and established programs there clinically,” he said. “I took care of a lot of patients. Life was good. Then I got a call to come down and was very impressed by the dean of the University of Miami and the president of the university, who was Donna Shalala, who convinced me to come and run the cancer center here.”

Now nearly 40 years in practice, Dr. Nimer is recognized internationally in the study of myelodysplastic syndrome, the foundation for which he’s served as chairman since 2011. For 35 years, he’s received continuous funding from the National Institute of Health. And late last year, he earned another honor when he became the first holder of the Oscar de la Renta Endowed Chair in Cancer Research.

Miami-Dade, he said, is the ideal setting in which to continue his work.

“This town has grown in leaps and bounds, as has the cancer center,” he said. “I saw the opportunity here to build something this community needs – a university-based academic cancer center where you see a doctor who’s not just familiar with your disease but an expert and researcher who knows what’s going on all over the country.”