Advertisement
The Newspaper for the Future of Miami
Connect with us:
Front Page » Top Stories » Jackson Health System heads to $25 million April loss 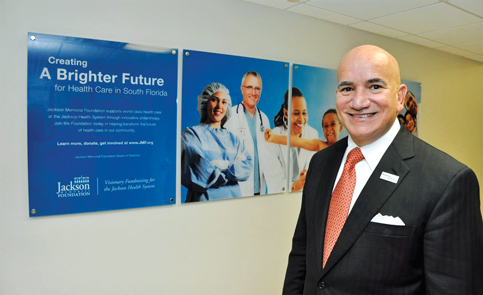 Hospitalizations for Covid-19 in Miami-Dade and Broward counties have declined over the past two weeks, according to Jackson Health System CEO Carlos Migoya, who said Monday that while he expects that trend to continue, “April and May will still be very ugly months.”

“At best, we will see Jackson being able to get back to what the new normal will be … sometime in June,” he told Miami-Dade County Commission Chairwoman Audrey Edmonson’s policy council. “We’re better today than we were four weeks ago, and we’ll be better four weeks … from where we are today.”

Mr. Migoya, who in late March tested positive for the virus, per a Jackson press note, said the hospital system “continues to be at a very low census” and has been “running fairly flat since April 6 in the number of Covid-positive patients.”

The hospital, he said, has maintained care of 165 positive patients and is observing 50 to 70 others who have been admitted and are undergoing testing.

“Of that group, typically 10%-20% test positive,” he said, with some ending up in intensive care units and a smaller number on ventilators, of which Jackson has “plenty available.”

Protective equipment is also in good supply, he said.

“Everything is working very well,” he said. “It feels like we hit the peak at about April 14, and we’re at a point now where we’re [able to] continue …  slightly reducing [the number of cases, and I] don’t expect to have a great surge.”

Jackson’s greater challenge is financial. Mr. Migoya estimated a 40% revenue decline since the beginning of March as elective surgeries dropped to zero, leading to a $13 million shortfall that month alone. This month, he said, the nonprofit county health system is on track to lose another $25 million to $30 million.

County lawmakers will vote May 5 to authorize a $150 credit line from Wells Fargo to keep the system afloat. Deputy Mayor Ed Marquez said the credit, drawable in $5 million increments as needed over three years, is “absolutely necessary” to ensure Jackson has “adequate resources to help in keeping the community safe and reducing the risk of Covid-19.”

Jackson would still need county approval “for each draw made,” he said.

Federal stimulus dollars meant to help hospitals deal with the flood of patients have disappointed, Mr. Migoya said. Of $100 billion set aside for healthcare facilities in the $2.2 trillion CARES Act, $30 billion was for fee-for-service Medicaid. Jackson’s percentage of such services, he said, “is very, very poor,” yielding the hospital just $16.5 million.

Additional funding is rumored to come, he said.

“We hear there’s two tranches coming out – one for $20 billion that will be done for hospitals based on managed Medicare [and] Medicaid, which will help Jackson,” he said. “There’s another one, a smaller tranch for $10 billion that will go … to the top 100 counties with Covid patients in the United States. Last I heard, we’re in the top 15 … and that will go to hospitals in relation to the number of ICU beds they have.”

Commission Vice Chairwoman Rebeca Sosa asked what large-scale testing is available in the county. Reading from notes, she cited the Spanish Flu, whose second infection wave devastated Philadelphia in 1918, leading to overpopulated hospitals and 4,500 more dead within a matter of days.

Mr. Migoya, deferring to county Mayor Carlos Giménez for a county-wide perspective, said Jackson is now self-sufficient, no longer relies on third parties for testing and by Monday will be able to test every patient who comes to its facilities.

Testing of all Jackson employees will hopefully come soon, he said, adding that more than 1,700 employees had already been tested so far.

Concerns over the accuracy of tests available aren’t without merit. Asked by Commissioner Barbara Jordan whether the county has “mechanism for determining the best” and most accurate tests, Mr. Migoya said that, due to the virus’ relative newness, tests are still “being calibrated.”

“The antibodies are still not accurate enough,” he said. “The machines … have a 30% error rate.”

Early on, Jackson prioritized people with symptoms or other morbidities aged 65 and older, taking in many high-risk patients. Now the system is testing all adults with symptoms.

Broader testing is still needed, he said, but the county should refrain from putting too much faith into newly announced tests, of which “none have been tested.”

“We’re used to having things that have been tested, pretested and retested. Right now, everybody’s six-shooting – everybody says they have a new vaccine,” he said. “We have almost more clinical tests in Jackson today than we have patients. We are running 30 clinical tests on Covid patients alone from very smart people … mostly from the University of Miami, [and] that’s just Jackson. Multiply that by the entire country. Someone will get it done.”