Advertisement
The Newspaper for the Future of Miami
Connect with us:
Front Page » Government » Call for more accurate Covid-19 test overblown, Giménez says 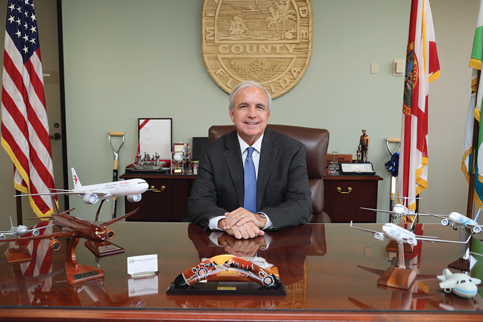 “[Testing] gives people a false sense of security that, somehow, ‘Well, I got tested.’ Well, five minutes after you get tested, you can become positive,” he told commissioners in Chairwoman Audrey Edmonon’s policy council. “We’ve got to change behavior … stay away from each other … wear masks [and] wash our hands.”

Fully eliminating the virus is “never going to happen,” he said.

“What you can do is reduce the spread, so we never, ever exceed the capacity of our hospitals,” he said. “That’s the measure that we’ve done – that, and as we start to open up, we open up with the view in mind that we limit the spread of the virus.”

More than a month has passed since the mayor issued social distancing directives and ordered closures of all “non-essential” businesses. Since then, he said in an April 13 memo to county commissioners, the county has spent $10.8 million on unbudgeted expenses, with losses through 2021 expected to exceed $170.2 million.

Mr. Giménez, who ordered parks and golf courses closed March 19 and marinas closed two days later, has begun to convene two advisory groups – one to examine how the county can best rebound economically, the other to focus on reopening public spaces.

During a Zoom conference late afternoon Monday, he said that while beaches closures will continue for now, his administration plans to ease restrictions on parks, golf courses and marinas.

“Doctors agree that open-air activities are good for people’s physical and mental health,” he said. “We would like for people to get some fresh air and sunshine but do it in the right way.”

People must still practice social distancing while outside, and violations will be “heavily enforced,” he said. Park visitors may walk while wearing masks, jog without them and use park amenities under certain conditions, including using their own balls for sports activities.

Golf courses will reopen, minus the use of caddies. Boats 37 feet or longer with eight or fewer adults (and no expressed limit of children on-board) will be permitted.

“Any openings will be met with zero tolerance for those who break the rules on social distancing, or if we find 10 or more people clustered in any area,” he said, adding that his administration would reopen spaces only after consulting with medical experts. “We will not open up any activities if it goes against medical advice, period.”

But those numbers are misleading, the mayor said.

“We have tens of thousands of people who are positive for this virus – believe me – to the order of probably 10, 15, 20 times more people here who are probably positive or have had the virus,” he said. “Testing is great and, as we have more of it, we can do more things. But at this point we just don’t have enough for 2.8 million people. It’s not there, and so we have to do the best we can with what we’ve got.”

To that point, Commissioner Barbara Jordan said, reopening parts of the county now is “like playing Russian roulette,” particularly as younger residents “who are very restless” may see reopenings “as a license” to behave unsafely.

“Until we get something solid [in terms of testing], we need to move very cautiously before we make those kinds of decisions,” she said.

Mr. Giménez agreed caution is needed but said prolonging closures are untenable, reiterating that people need to change their behavior.

“You have to assume that everybody is positive, including yourself,” he said. “Some people are going to be irresponsible, and that’s why we need to have … strict enforcement of whatever rules we put in place. [But] if we’re going to wait for testing for everybody, we’re going to be at this a year from now. I don’t think the county can take it.”