Advertisement
The Newspaper for the Future of Miami
Connect with us:
Front Page » Transportation » Miami-Dade Transit ridership falls 80% 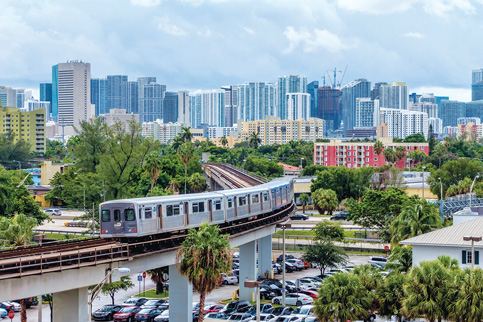 That’s a loss of about 5.4 million monthly riders, with ridership now at 1.3 million, based on last year’s system-wide numbers.

“It’s holding steady at that level,” she told Miami Today.

TPW eliminated fares and reduced services across systems, first advising Special Transportation Service users to take only essential trips and limit use to one rider per vehicle. Metrobus cuts and elimination of highway express routes followed.

Most agree cuts were needed, but some say notice was too short.

When Covid-19 passes there may be a “new normal,” she said, as people adjust to work from home and residual fear of infection holds down ridership.

“This is the time for transit to come back stronger than ever with a redesigned system,” alliance Director Azhar Chougle said.

Some, including Commissioners Daniella Levine Cava and Eileen Higgins, suggest Metrobus remain free for a time so users can learn the new routes and riders can join. Ms. Bravo said it’s too soon to say if that’ll happen.

“In the financial crisis in 2009, ridership grew dramatically as people couldn’t afford cars and fuel prices were high,” she said. “We’ll have to see the situation evolve more before answering that question.”