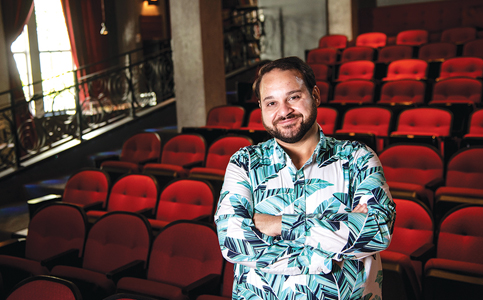 He spends part of his work day helping run O Cinema, an independent cinema that’s been bringing unique, indie movies to Miami audiences for nearly 10 years. He founded the independent theater with Vivian Marthell, with whom he had worked at the Gay and Lesbian Film Festival.

As a filmmaker, he has directed documentaries that shine a light on little-known Miami stories. His most recent release, directed with Cristina Costantini, “Mucho Mucho Amor,” dives into the life of the late Walter Mercado, a gender-bending TV astrologer who enthralled Latino audiences for decades. The movie is to be released on Netflix this summer.

“I don’t have to look very far for my next film because there is always some crazy Miami story that I want to tell,” Mr. Tabsch said.

A Miami native, he recalls wanting to leave when he was younger. But today, he’s proud of his hometown, urging people to either come back or to stay. He recalls that when starting O Cinema, people would say, “Nobody’s going to come see independent movies. Miami’s not sophisticated enough.” He says those voices were proven wrong.