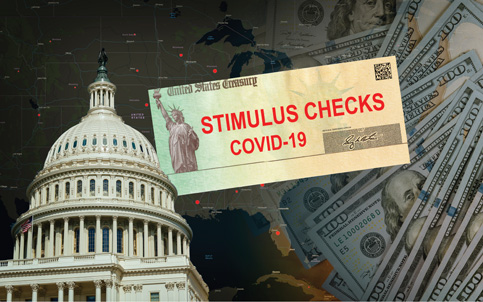 General uncertainty remains about when individual stimulus checks of up to $1,200 will arrive, but Miami-Dade residents shouldn’t worry about whether banks here can handle the influx of deposits, local finance leaders say.

Depositing the checks will be “business as usual,” according to Roberto Muñoz, Miami-Dade market president for First Horizon Bank, who said the process will be akin to how banks handle yearly IRS tax refund deposits.

The volume could overwhelm banks if people need access to bank lobbies or drive-thrus, said Mr. Muñoz, who also serves as chairman of World Trade Center Miami and treasurer of the Greater Miami Chamber of Commerce.

“Either way, [people] will be receiving monies,” he said. And the more comprehensive their tax filings last year, the better their aid will be.

More difficult to predict is the timeliness and efficiency by which the US Treasury sends the checks, said Lloyd DeVaux, president and CEO of Sunstate Bank.

That issue could further be complicated for those who changed banks since filing taxes last year – particularly, he said, if they rely on direct deposit.

“When that direct deposit goes out, it’s going to go back unless you’ve set up the information properly with the IRS,” he said. “Some people [will] still get checks, and those will probably get a check further down the road. I expect that’ll go well.”

With a flood of checks coming to boost liquidity in the economy, bank balance sheets will be “a little inflated” for now, but that won’t cause many problems, said Jose Cueto, president and CEO of International Finance Bank.

“For the foreseeable future, you’ll see balance sheet expansions in banks and a little more pressure on rates as they’ll have to deal with whether they want to compensate these deposits or take more of a [demand deposit account] approach,” he said. “That could put some downward pressure on what banks are willing to pay, as it’s inundated with this liquidity. Typically, banks pay up on rates when liquidity is a bit scarce or they have very high loan deposits. This lending market is now semi-paralyzed, so the combination of both will bode for rates going down for banks.”

The bank, he said, is “slammed” with Small Business Administration (SBA) loan requests, which have been notoriously hard to secure amid coronavirus closures and resultant strains on local small businesses because the federal government kept moving the proverbial goalposts.

“We have worked non-stop, day and night for the last 10 days including weekends, to ramp up,” he said. “It was very difficult, because the SBA and Treasury changed the terms of the program almost on a daily basis until days ago, when they seemingly finalized the program.”

Now that the program’s strictures are set, he said, bank staff worked through the holiday weekend to expedite the more than 200 loan request they received in just a week’s time.

“We have over 100 customers already approved by the SBA and began to close on those, and in total we have over $100 million in SBA Paycheck Protection Program loan assistance requested,” he said. “We know how critical it is that we get money into our small business customers’ hands as soon as possible.”

Another big issue, “which is positive,” is that many property owners are applying for mortgage refinancing as a result of the Treasury’s reduced interest rates.

“Our mortgage division,” he said, “is very busy.”