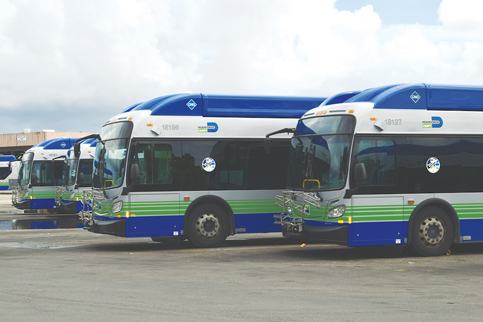 Just over a handful of workshops remained before votes by city and county commissioners were due. Miami was to vote first, on March 26. Miami Beach lawmakers would have followed suit early this month. Approvals by Miami-Dade commissioners were expected in May and June.

The newly drawn network, among other things, would double the number of residents within a five-minute walk of buses running at 15-minute intervals. It would also increase access to jobs, retail, schools, healthcare and government by 33%.

Now, amid transit reductions and limited non-emergency government meetings, Transit Alliance is working to ensure that the county emerges from the crisis with an improved bus system that will help residents recover.

“No one knows how long this will last, and the longer it does, the more severe the impacts will be to our economy,” said Azhar Chougle, executive director of Transit Alliance Miami. “We’re focusing on finding a way to make sure that, when we come out of this, we implement the new system rather than go back to the old one.”

In a sense, now is the perfect time for the changeover. Many are sequestered at home or working remotely when possible. Transit vehicles often run at half-capacity or less. To help those still traveling to work and stem the spread of coronavirus through contact points, Miami-Dade Transit last month suspended all fares and station parking fees, and employed all-door boarding on buses.

Those are the right things to do now, he said, but in order to successfully rebound once things return to normal, residents will need a more efficient Metrobus network that connects to more jobs and key services.

“Implementing redesigns are difficult because of the logistical impacts,” he said. “But right now, very few people are riding the transit system. This is the time you want to implement a redesign, and very few cities have this sort of confluence of opportunity to get this done.”

The Better Bus Project has elicited passionate responses since Mr. Chougle, at the invitation of county Commissioner Daniella Levine Cava, delivered a five-minute presentation on the subject to county lawmakers in August 2018.

“I welcome this gentleman’s input,” Mr. Giménez said. “A lot of what he has to say makes sense.”

Central to the project is balancing Miami-Dade’s unique transit needs from two priority points that, while not always oppositional, required hard decisions to be made for one or the other.

One is ridership, which favors efficient, high-frequency routes to and from high-traffic hubs that can gain riders but potentially covers a smaller geographical area overall. The other, coverage, aims to serve as broad an area as possible at the expense of frequency and efficiency.

Transit Alliance presented the benefits and drawbacks of the models, as well as combinations of both, to residents, stakeholders and government officials throughout 2019. The group participated in or hosted more than 120 meetings, attended by some 26,000 people, and received thousands of survey responses, adjusting its map accordingly to reflect their wishes.

The hybridized result, which prioritizes 85% ridership and 15% coverage – with coverage particularly emphasized in South Dade – offers many clear advantages over the old system.

“We are giving 370,000 additional residents in Miami-Dade County access to a bus that comes every 15 minutes throughout the day within a five-minute walk,” he said. “Today, around one in 10 residents have that opportunity. We’re going to make that one in four. We’re also going to give the average Miami-Dade residents access to… around 41,000 more jobs, which is really important coming out of this. And, for the first time, we’re integrating the trolley system, so the City of Miami, Miami Beach and county systems all work really well together.”

The new system, he said, will cover 98.6% of all existing Metrobus boardings. That still leaves out 1.4% of the system’s current riders, but it is important to consider the change in the context of the steady ridership drop-off the bus system has long suffered.

Metrobus use fell from more than 78 million boardings in 2013 to under 50 million last year, county ridership reports show. That 36.2% decline over seven years, he said, is best reversible by comprehensively changing a system that for years hasn’t adequately served residents’ needs.

“That’s the balance here: give people all of this amazing access to frequency and opportunity, and create a more usable system,” he said. “Think about the essential workers today who are using not only an old system but also reduced service. All those people – and more – are far more useful [with this new] system…”

Over the past several months, county Commissioners Jean Monestime, Xavier Suarez and Javier Souto have proposed free trolley and Metrobus routes as pilot projects for either a partially or fully free transit system here.

“It’s time for Miami-Dade County to come into the 21st Century and provide fare-free public transportation,” he said in a Dec. 15 press note. “Given the fact that total revenues from buses and Metrorail barely exceed $100 million, which is less than 2% of the operating budget for the county, the time has come to induce the use of mass transit by any and all means.”

Thus far, county lawmakers – most vocally Eileen Higgins and Ms. Levine Cava, who along with Mr. Monestime is also running for mayor – have shot down the free transit proposals, citing each time the expected delivery and passage of the Better Bus Projects as a reason.

They argued that the newly designed system, once delivered, should include a period of free ridership so residents can acquaint themselves with the changes and determine how best to plot their daily commutes.

“We’ll have a lot of people whose livelihoods have been literally destroyed because of this, and free transit is just one way to help,” he said. “When people are put in this situation, the best thing you can do for them, if they rely on transit, is give them a system that connects them to more jobs. That’s exactly what the Better Bus Project does.”