Advertisement
The Newspaper for the Future of Miami
Connect with us:
Front Page » Top Stories » State accelerates Signature Bridge and related projects 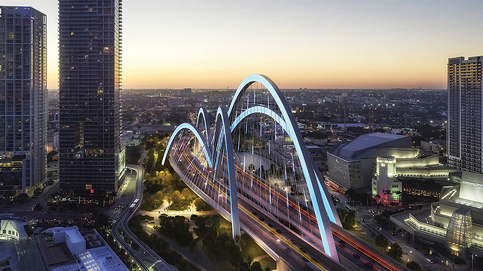 Miami’s notoriously crowded streets have become the road less traveled with the sweeping impact of the Covid-19 pandemic.

With most businesses, stores and shops shut down and social distancing being preached and practiced, the highways and byways are seeing meager traffic in comparison with the bumper-to-bumper of not so long ago.

The governor and state transportation department see this rare unfolding event as an opportunity to speed up road construction projects, including the new Signature Bridge rising in downtown Miami.

At the direction of Gov. Ron DeSantis, the Florida Department of Transportation (FDOT) has started accelerating critical infrastructure projects, which are valued at $2.1 billion.

Due to a reduction in traffic throughout Florida during the fight against Covid-19, FDOT will expedite crucial improvements to the state’s transportation system and provide much-needed jobs, said FDOT Secretary Kevin J. Thibault.

As part of the move to accelerate road projects, the department announced that the downtown Miami I-395/SR 836/I-95 Design-Build Project will be accelerated by four weeks, Mr. Thibault said.

The work includes the “Signature Bridge” over Northeast Second Avenue and Biscayne Boulevard, an upper deck of traffic built over SR 836 and the Miami River, and the addition of one lane to the northbound entrance to I-95.

With less traffic due to the health crisis, the department is able to expedite certain projects, said Senior Community Outreach Specialist Oscar Gonzalez III in an email to Miami Today.

“For example, depending on the project, the hours for lane closures could be extended allowing for more work to be completed, such as the concrete replacement on I-95 from NW Eighth Street to NW 29th Street. We are looking to move up the completion date for the concrete replacement work on I-95 by approximately four weeks,” Mr. Gonzalez wrote Tuesday.

He said the contractor has expanded work hours within the project limits, which allows work to be expedited while maintaining safety for the workers and drivers.

This includes lane closures during daytime hours, which under normal traffic conditions would not be possible.

“We have been able to implement daytime closures on SR 836 from Northwest 20th Avenue to west of the Miami River to allow the contractor to prepare for a traffic shift that will move the eastbound traffic to the right side of the road,” he said.

They are also looking at continuous closures, 24/7, on I-95 to expedite concrete replacement.

On I-395 work continues on foundations for the new I-395 Signature and segmental bridges. The contractor is also removing sections of existing bridges to open up additional work areas, according to Mr. Gonzalez.

Preliminary work began on the I-395/SR 836/I-95 Design-Build Project in December 2018, with full-on construction commencing in early 2019. Anticipated completion is fall 2024.

The governor last week named construction projects that are being moved up by weeks or months and said transportation officials have been directed to find more as the coronavirus cuts down on traffic.

“It’s sad that we’re in this situation, but I’m glad that we’re able to make the most of it,” the governor told reporters.

A statewide map was also released showing the projects targeted for a speed up.

The decision was made following an initial review of all pending construction across all FDOT districts, including the Florida Turnpike Enterprise.

Mr. Thibault said, “The governor understands that Florida’s transportation system is the backbone of our economy and FDOT is proud to accelerate projects, which will help expedite goods to market and provide much-needed jobs throughout the state.

“Safety is our top priority, so we will continue to ensure that employees have the sanitation supplies needed to follow the guidance from the CDC and work with our industry partners to implement these same precautions to keep workers safe and healthy.”

With jobless claims spiking and most of the hospitality industry shut down or dramatically scaled back, Mr. DeSantis said he’s seen from his travels across the state that traffic on many heavily traveled thoroughfares has become just a “trickle.”

“I think that there is an opportunity to take advantage of that,” he said. “We have roads that if you were to do a lot of construction on would cause massive traffic [congestion] in normal circumstances. That may not be the case now.”

Some of the other projects identified by FDOT to be accelerated include:

■The $864 million Howard Frankland Bridge project in the Tampa Bay area will be accelerated by nearly four weeks.

■The widening of Southern Boulevard (SR 80) in western Palm Beach County will be accelerated by nearly three months.

■The project at Sand Lake Road (SR 482) near the heavy tourist area of International Drive and Universal Boulevard in Orlando will be accelerated by four to six weeks.

The News Service of Florida contributed to this report.

One Response to State accelerates Signature Bridge and related projects