Advertisement
The Newspaper for the Future of Miami
Connect with us:
Front Page » Profile » Gale Nelson: Building mentoring partnerships for underserved youths 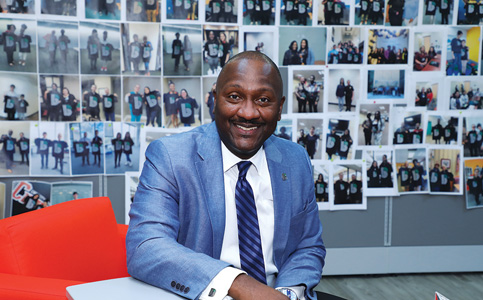 Gale Nelson never sought to work in the nonprofit sector. Growing up in inner-city Toledo, OH, when given the chance to attend college, his goal, he said, was to make as much money as possible to take care of his mother and brother.

But after moving to South Florida post-college, he’d get the same question, “Are you a teacher?” He balked at the idea initially. But it persisted, and he ultimately gave it a try, first teaching GED prep for single mothers, then at the Community Health Institute in South Dade.

After Hurricane Andrew, he was asked to teach 13 boys who had broken the law, who were helping to rebuild the community after the storm while completing high school testing.

None was interested in learning – at first. But through inventive, inclusive methods – teaching them percentages, decimals and fractions on the basketball court and probability with a bag of Skittles, among other approaches – he reached them.

“Long story short,” the president and CEO of Big Brothers Big Sisters of Miami (BBBSM) said, “this job found me, and I’ve never looked back.”

His upward trajectory in the field was determined and continuous, and in 1993 he took over a juvenile justice boarding school for 13- to 18-year-old, court-committed boys.

The school gave them structure – a normative environment with expected behaviors and a pathway to academic success – but the corrective rather than preventative approach to intervention troubled him.

“They had to be arrested to get the help they needed,” he said.

In 2006, he accepted a job offer from BBBSM, which since 1958 has served as South Florida’s premier nonprofit mentoring organization for at-risk boys and girls. Over the next fiscal year, he said, he plans to expand the group’s influence to the Florida Keys.

“I want to prevent kids from going into the juvenile justice system and put them on a path where they can be more productive,” he said. “It’s $1,500 a year – the cost of a cup of coffee, $4.69 a day – to mentor one little boy or girl, versus $50,000-plus to incarcerate a child. Easy decision.”