Advertisement
The Newspaper for the Future of Miami
Connect with us:
Front Page » Healthcare » Embattled fitness professionals train for stay-at-home world 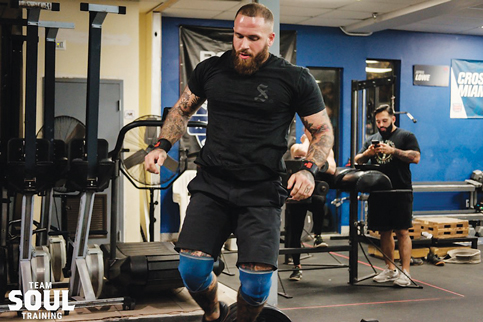 Less than a week into closures of all “non-essential” businesses due to the coronavirus, Danny Lopez-Calleja estimated he could keep things running for about three months. After that, the future looked grim for CrossFit Soul, the gym and competitive powerlifting and athletic training center he’s grown over the past decade.

He’d already resigned to not paying rent this month for the gym’s Westchester warehouse, having lost about $5,000 from cancellations and membership holds, among other things.

Half of his employees are hourly contractors. For the next three months, he said, he wouldn’t have work for them. Those salaried would still be paid, albeit 20% less than normal, a condition that could worsen as social distancing restrictions further constrict his funding reserves.

“They’re all getting smashed,” he said.

Such is the case for most fitness professionals who, with scant exception, rely on access to shared physical space to earn an income. Without it, some are taking the leap – many for the first time – to digital.

It’s hardly a novel concept for the industry. In recent years, startups like Peloton, Beachbody and Mirror launched to fill the gap between home and gym, enabling those with time or money constraints to exercise where and when they choose.

But most independent, hyper-local businesses are now playing catch-up while those companies and several other global fitness groups offer free services amid the current crisis.

To compete, CrossFit Soul now also has free classes on its website, both to retain existing clients and to reach a greater customer base. He’s thinking of charging $35 to $75 for the new service, starting mid- to late-June.

“All the stuff we do at our gym, we now offer online,” he said. “Anyone affected by this crisis, if you’re looking to get fit for the first time or get back in shape, we have a program that’s suitable for you.”

Other gym owners are less inclined to make the leap. Dan Monteleone, owner of Evolution MMA, a mixed martial arts and bootcamp facility in Kendall, said much of what he and his staff teach just doesn’t translate to a digital medium.
The gym’s post-shutdown push online so far has mostly been quick, often humorous videos posted to social media, ranging from stretching techniques to weight training with everyday objects – backpacks, one-gallons jugs and 1.5-liter vodka bottles.

“If I was teaching traditional karate, it would be simple. They’re usually standing in front of a mirror, throwing punches, doing katas – stuff like that,” he said. “But for combat MMA, I’d have to completely change the format and would probably lose students. How do you teach someone to do an armbar without a partner?”

As of March 25, Evolution MMA’s revenue had already fallen 50% as many clients froze their memberships and no new enrollees signed up.

He still planned to pay his four instructors their per-class fees as if the classes had happened, but that arrangement wasn’t likely to last unless something changed.

“The rent’s due at the end of the month, and we’ll see where things are,” he said. “If we don’t have a location to go back to, then it’s really over.”

Fortunately, help is imminent. Washington last week passed the $2 trillion stimulus package, through which self-employed, contract and low-wage workers put out of work by the pandemic here are eligible for $875 in weekly assistance – $600 more than what Florida normally provides.

Unemployed workers in Florida can receive assistance for up to 36 weeks, 13 more than the maximum usually permitted under state law. The aid will supplement up to $1,200 in per-person payments to adults and $500 for each child.
Sole-proprietor, employee-owned, cooperative or tribal businesses with 500 or fewer employees can also apply immediately for a $10,000 advance on an Emergency Economic Injury Disaster Loan, if they were in operation prior to Jan. 1, according to the federal Small Business Administration.

There are no up-front fees or early payment penalties, and repayment is determined by a business’s “ability to repay the loan,” the administration’s website says.

Through May 8, businesses here with two to 100 employees can also seek up to $50,000 in short-term, interest-free loans through the Florida Small Business Emergency Bridge Loan Program, Gov. Ron DeSantis said.

The aid will be be a godsend for Libby Cristi, owner of Stretch Work Yoga, a “floating” yoga class with set locations across the county.

She, like many others during the shutdown, turned to social media and other online methods to reach existing and potential clients, providing classes through Instagram and on Zoom, a video communications platform for which she now pays a premium in order to host larger classes.

The paradox of paying extra for a service she never before needed while already losing nearly $700 a week isn’t lost on her.

“I’ve definitely been stepping out of my comfort zone, but there is such uncertainty,” she said. “But I’m grateful I don’t have an actual physical space to keep up with. It’d be a whole other chaotic mess if I knew I had to pay rent, water and power.”

Rebecca Cantor, a Zumba and PoundFit instructor at three major gym franchises, similarly doesn’t have to worry about most overhead costs. And her day job as a lawyer provides financial comfort others in the fitness sector don’t enjoy.
She’s teaching online as often as she can, having fixed some of the problems temperamental connections create for workout programs that rely on rhythm, but other issues cause her unease.

“I worry about injury,” she said. “If my students keep their cameras on, I see what they’re doing. Some are jumping on tile. It’s not the same as a basketball court or dance floor.”

More than that, she said, she misses the people who take her classes. She hasn’t seen many in weeks because they’re seniors who eschew many modern technologies, including social media.

“I’m desperate to get back into the gym, to see my people,” she said. “There’s something special about having a group fitness class, where we’re there together.”

Even when things return to normal, gym owners and staff shouldn’t expect business to resume as if nothing happened, said Dan Martin, owner of CrossFit 305 in Little Haiti and CrossFit A1A on Miami Beach.

He sees the crisis not as a temporary hurdle but as a catalyst that could change how fitness services are designed, marketed and delivered.

While many traditional gyms will recover, he said, it won’t be fast enough for some that are either unwilling or not nimble enough to adapt to this new paradigm.

“People are going to feel differently about going to these physical spaces,” he said. “There’s no two-week comeback from this. People are freaked out.”

It wasn’t easy to onboard his gyms’ programs to a digital platform, he said. But the result, the “World Wide Workout Party,” is online 6 a.m. to 7 p.m., with multiple live class types and daily themes.

Adopting a streaming fitness service model will work for some, he said, but instructors with more reserved personalities could be eclipsed by their exuberant counterparts.

“You have to have a big personality for this, and you have to have a program that allows for that,” he said. “Everybody wants to and thinks they can be the next Peloton. That’s not true. A lot of gyms will go under because of this.”

The good news, he said, is that community gyms should have at least one key leg up on the corporate competition: their relationships with clientele.

“Everyone thought David Barton, Equinox and Planet Fitness were going to be around forever. They weren’t. I think about companies like F45 that just started a massive expansion with private equity money – Mark Wahlberg money,” he said. “These aren’t community-based gyms, many of which have been around 10-plus years and are going to make it just based on their ability to understand, be compassionate and be great at their service. I’m not saying all of them, but a good chunk of really good community-driven gyms will at least be OK.”