Advertisement
The Newspaper for the Future of Miami
Connect with us:
Front Page » Healthcare » University of Miami research seeks half-hour coronavirus test 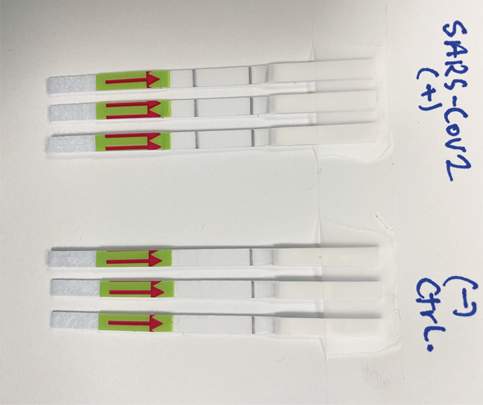 As more cases of the novel coronavirus are reported, faster testing is needed to stem the spread of the infectious disease. At the University of Miami’s (UM) Miller School of Medicine, a researcher with a background in developing such a test and her team are now working on one to aid in the current global crisis.

Lead researchers working alongside her include Dr. Sapna Deo and Dr. Jean-Marc Zingg. In total, about 30 people are involved in the project.

The new test will require just a simple throat swab and provide results within a half-hour by way of a paper strip. Most current tests take five to six hours and require expensive thermal cyclers and blood draws, a release from the school said.
“The test works as follows,” Dr. Daubert told Miami Today. “First, we swab the throat of the individual. Once we have the swab sample – the same as you would do when you go to the doctor’s office and they suspect you have strep throat – we put it into a test tube, where reagents amplify the genetic material of the virus. Then we utilize nanotechnology to visualize whether the individual is positive or negative for corona by putting a little test strip into the tube. We leave it there for a couple minutes and see whether it develops one or two lines. In a sense, the result is very much like it would be for a pregnancy.”

Early research of the test suggests that it is specific to Covid-19, the current and particularly deadly strain of the virus, and does not react to previous coronavirus subtypes. Its inexpensive design allows for relatively low-cost manufacturing, mass production and worldwide deployment, the release said.

It also should be able to detect the virus in a patient within a couple days of exposure.

The origin of the test, Dr. Daubert said, goes back to when the Zika virus hit Florida in 2016. At the time, no testing for the virus was available, so she and her team set to work on a test like the one they’re developing now, down to the two-line paper strip.

But less than one year into their work – a planned three-year research and development phase – former Florida governor and current US Sen. Rick Scott’s administration defunded the program.

“Fortunately, we decided this was really important and continued to work on developing the test, and we were very successful in that,” she said. “Now we have that platform ready, and when we found out about the pandemic that’s happening with the coronavirus, we adapted the platform for it.”

Dr. Daubert’s team is now in now finishing all the experiments required by the Food and Drug Administration and, once done, plans to apply for expedited approval.

“Once we have that answer, we can put it out to the University of Miami labs to start using it for patients and, once we have already used it in our own facility, then we can manufacture and distribute it,” she said. “In an ideal world, if everything’s available, it would not take much time to get it out the door. But I cannot predict right now how the situation will be.”

Dr. Daubert said her team also plans to develop another paper-strip test that can detect whether a person has already been infected with the virus but no longer has it, which will be helpful in determining whom to vaccinate.

While Dr. Daubert and her team are developing tests, another researcher at the Miller School of Medicine has been working on such a vaccine.

Dr. Natasha Strbo, assistant professor of microbiology and immunology, is leading a research team at the school in adapting a vaccine platform developed under the guidance of the late Dr. Eckart Podack, former chair of the school’s Department of Microbiology and Immunology.

Dr. Podack, who co-founded Heat Biologics in 2008, studied using a specific heat shock protein to treat non-small cell lung cancer. His research has since gone through testing as a vaccine against HIV, malaria and other infectious diseases in lab trials funded by the National Institute of Health and the Department of Defense.

Heat Biologics CEO Jeff Wolf said he couldn’t say definitively what the timeline will be for the rollout of the vaccine once it’s approved, but recent federal efforts to speed the vaccine-approval process are encouraging.

“We are facing an emergency situation,” he said. “Typically, approval for a vaccine or diagnostic would take a long time, but the Food and Drug Administration has really worked with the [Trump] administration to streamline things and make available these vaccines and diagnostic protocols as soon as possible. There’s every effort being made to get this into the hands of patients who need it as soon as we can.”