Advertisement
The Newspaper for the Future of Miami
Connect with us:
Front Page » Top Stories » Transit hub to feature University of Miami student housing 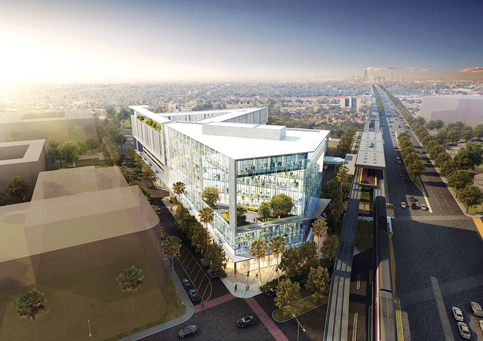 New student housing is a key component of a major mixed-use project in South Miami destined to become a transportation hub for the region, according to the developers.

The TREO group, in collaboration with Miami-Dade County, is building the mixed-use, transit-oriented student housing development to be called VOX Miami.

Officials from The TREO Group and county government officials held a formal groundbreaking Feb. 27 at the site at 5801 S Dixie Hwy.

The $125 million development will rise at US 1 and Sunset Drive and be a neighbor to the South Miami Metrorail Station.
Along with providing new Class A office space in a separate building, the development will cater to housing demands of University of Miami by providing a 361-bed student housing facility and seamless public transportation options to get to and from campus.

The project will also include some ground floor retail uses to help enhance the pedestrian experience.

The overall development will come in two phases and incorporate an existing five-story parking garage.

The TREO Group – a Miami-based, privately-held real estate investment and development firm – is leasing the more than 6-acre county-owned property.

Over the entire 90-year term, it is estimated the leases will generate $100 million in revenue to the county, and about $250,000 in improvements to the Metrorail station.

The planned improvements include design and replacement of the existing canopy connecting the parking garage and the station; and improved landscaping between the new development and the station.

VOX Miami’s enhancements to the station are projected to increase ridership and help drive additional revenue to nearby retail destinations, the developer said.

Ms. Bravo said, “Transit-oriented developments provide the type of land use needed for quick and easy connections to mass transit options. By increasing access to public transportation, we can reduce the number of cars on the road and traffic congestion.”

She said VOX Miami is an exemplary public-private partnership.

“While we provide the space, the county benefits in many ways with station enhancements, ridership increase, and added revenue for the land use. Additionally, this project is a particularly unique for us, because it will be the first-ever all student housing on a Miami-Dade Transit property,” said Ms. Bravo.

The first phase of VOX Miami will deliver an eight-story, off-campus student housing building with more than 300 beds amidst 99 units.

Set for delivery in August 2021, just in time for the 2021-2022 academic year, it is designed to elevate the residential experience for University of Miami graduate and undergraduate students, said the developer.

This alternative to traditional university housing will offer attainably priced one- to four-bedroom floorplans, including rent-by-the-bed options. Each unit will be equipped with a private living room and kitchen.

“We are thrilled to soon bring to fruition this development that will aid in transcending the economic and social progression of Miami,” said Otto Boudet-Murias, principal with The TREO Group.

“VOX Miami is designed to fulfill the needs of various community sectors, from University of Miami students to local businesses, while providing convenient accessibility via the Metrorail and bolstering the overall appeal of public transportation,” he said.

VOX Miami’s second phase will be 195,000-square-feet of “Class A” office space and additional ground floor retail. A construction timeline has not been announced.

The project will be financed entirely by the developer and no government funding is required for the project.