Advertisement
The Newspaper for the Future of Miami
Connect with us:
Front Page » Education » MIT students co-teach to inspire STEAM careers 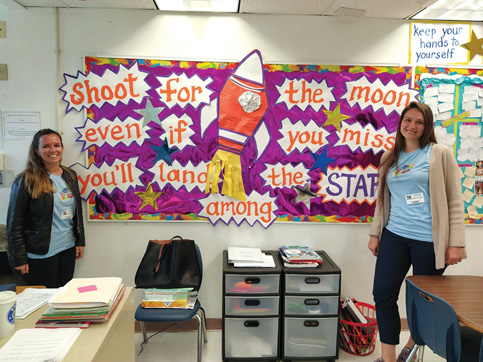 Most students hoping to learn about science, technology, engineering and mathematics from world-class academics must first score well on standardized tests to earn a seat in a college classroom.

At a K-8 magnet in Coral Gables, and at least one other Miami-Dade public school targeted for similar programming, some students need only make it to fifth and sixth grade.

The county this year welcomed its first group of students from the Massachusetts Institute of Technology (MIT) to serve as “co-teachers” at the Henry S. West Laboratory School, located on the University of Miami campus.

Their goal: to foster and boost interest in science, technology, engineering, art and mathematics and, in doing so, inspire elementary, junior and high school students to pursue educations in those fields and become future innovators.

Miami-Dade Public Schools Superintendent Alberto Carvalho called the program a “tremendous opportunity” and said he looked forward to expanding it “to further enhance the learning experience for our future leaders.”

The educational initiative sprouted from a partnership between MIT and Miami-Dade to establish the Global Co-Creation Lab, a health and technology concentrator that launched late last year with a $1 million funding earmark in the county’s 2020 budget.

While the lab itself partners with public and private stakeholders and entrepreneurs to accelerate the development and availability of new treatments for diseases, its educational arm is concerned with finding and developing the next generation of great minds.

“Students are the jewels of the crown, and we are looking for these raw diamonds to turn into jewels,” said Dr. Mercedes Balcells-Camps, program director for the Global Co-Creation Lab.

Dr. Balcells-Camps said her experience running a comparable educational program in Barcelona – as well as data gathered from MIT’s more than 30 like initiatives across the globe – has helped to inform its rollout here.

“It’s different here, because Miami’s ethnic diversity is enormous,” she told Miami Today. “But the main components of the program – having a group of students become co-teachers and a source of inspiration for talent in the schools, having exchanges with undergraduates and graduate students between universities with fellowships to develop applied research projects, which means they solve an unmet medical need and have an application directly – [are the same].”
College students from MIT and all over the world who have connections to the institute’s “very tight network” of students and educators are invited to participate in the co-teaching program, she said.

The co-teaching model isn’t one-size-fits-all. Rather, it varies depending on the needs of the co-teachers themselves and the local schools they serve.

“We do it person-by-person, and whoever wants to contribute to this effort and the mission of the Global Co-Creation Lab – research and innovation through education – is valuable,” she said.

It also involves faculty and leaders from local schools and hospitals coming to MIT to participate in workshops, where they can learn and share methodologies and best practices in order to improve innovation and the education vital to it.
Oddly, she said, the Global Co-Creation Lab and its educational programming are the first such projects MIT has undertaken stateside outside of its Boston headquarters.

“We have all these programs, [but] what about the US and the Americas? We had somehow forgotten our own neighbors down south,” she said. “There was an opportunity in Miami with Mayor [Carlos] Giménez coming and talking about collaboration with industry and business development, and I said, “With that, you need an educational component.’”

The West Laboratory pilot began in January after much consideration was given to where best to start the program. Dr. Balcells-Camps said she and others from MIT wanted to develop it “very slowly” with the guidance of Cristian Carranza, administrative director of academics for Miami-Dade Public Schools.

Reaching potential scientists at a younger age provides a benefit beyond sparking a greater interest in the subject early on. It also helps keep girls, whose desires to enter science-related fields diminishes over time, to remain engaged.

“We’ve lost a lot of female engineers and mathematicians later on,” she said. “Fifth and sixth grade are teachable [periods], where students make decisions. If my fifth-grade teacher hadn’t told me so much of science is still unknown, I would not be a researcher today.”

Carlos J. Finlay Elementary, a pre-K through fifth-grade school on Florida International University’s West Dade campus, is being looked at as the next school to have the program, she said, adding that she hopes to see it expand to high schools as well.

“It’s a bottoms-up approach, to start small, make sure we are learning and contributing to what they’re doing,” she said.
The next round of engagements between MIT students and local classrooms was to occur next month, but school closures here due to the coronavirus have delayed things.

But even before attempts to stem the spread of the virus necessitated that schools shut down and residents largely sequester themselves indoors, she said, the Global Co-Creation Lab was already working on digital methods through which co-teachers could reach more students while retaining some in-person visits.

“We were wondering how to reach the 340 schools here,” she said. “It’s very valuable contact, very powerful, [having on-site lessons where] a student comes to your class to explain how the heart works, the electrical conduits. We were thinking maybe on-site visits every three months but the rest remotely. Last week, when the precautions kicked in, that became even more important.”