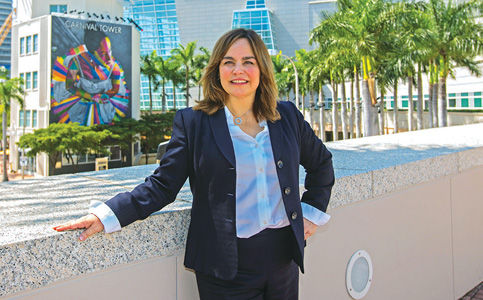 Aileen Ugalde emits an earnest exuberance. She’s confident but curious, a pair of attributes that complement both her day job and primary passion project.

For 14 years the Miami native has served as vice president and general counsel for the University of Miami (UM). It’s a position she earned after holding several other pivotal roles with the school, her alma mater, since joining it in 1994 as assistant general counsel.

“It’s 10,000 undergraduate students, about 7,000 graduate students, 15,000 employees, a half-billion dollars in revenue, [and] we operate the [UM] Health System,” she said. “It’s a major part of the South Florida landscape, as is the Arsht Center.”

Last month, she was elected to a two-year term as chairwoman of the Trust Board of Directors for the Adrienne Arsht Center for the Performing Arts. She’s been on the board for five years and is its first Latina head.

“It’s exciting, a terrific opportunity to bring additional perspectives to the leadership, the direction of the board and, maybe most importantly, to the sensitivities about what is compelling and most attractive about part of our community,” she said. “It’s a way of connecting.”