Advertisement
The Newspaper for the Future of Miami
Connect with us:
Front Page » Top Stories » Moishe Mana land swap deal for Puerto Rican center marches ahead 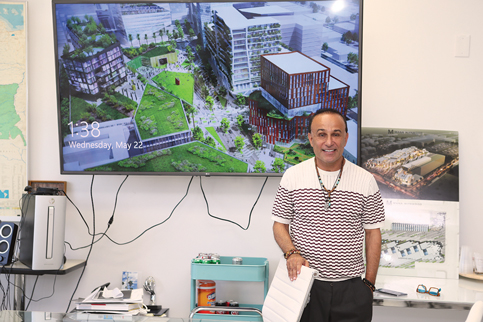 Developer Moishe Mana has thus far delivered on his commitments in a land swap and construction deal with Miami-Dade for a long-planned Puerto Rican Community Center and Chamber of Commerce, a county official says.

The billionaire businessman was by Jan. 31 to have given the county and City of Miami final designs and documents for the $8.36 million project, comprising three stories and 35,000 square feet at 2900 NW Fifth Ave. in Wynwood.

And that he did, said Leland Salomon, deputy director of the county Department of Regulatory and Economic Resources, adding that while the three parties continue to iron out small details, all major aspects are decided.

“It’s things like, ‘We don’t have enough plugs on this wall and would like to have a door here,’ that kind of stuff,” he told Miami Today. “But the building itself – the structure, parking spaces, elevators and basic layout – is all approved.”

Plans for the building began in June 2015, when the county commission OK’d a trade of four vacant county parcels in Wynwood for two nearby properties Mr. Mana owned.

The exchange relied on Mr. Mana providing space in the building for the Puerto Rican chamber and center, one of hundreds of voter-approved projects listed in a $255 million community improvement bond program.

At the time, the estimated project cost was $7.37 million. But numerous issues, from site contamination to disagreements over the building’s scale and cost, stalled matters.

On Dec. 17, the county commission approved new plans for the development, which is to include at least 24,851 square feet of fully furnished interior space, 2,060 square feet of terraces and 6,832 square feet for parking.

The building will also house the new satellite office for the county commissioner representing District 3. Chairwoman Audrey Edmonson now holds that seat, but she will face her term limit right around the project’s Nov. 1, 2021, completion deadline.

About $2.5 million of the project’s cost will be paid by county bonds, with the remainder borne by Mapton Holdings LLC and Mana Fashion, of which Mr. Mana is respectively 99% and 100% owner.

Mr. Mana told Miami Today last year that he and his team have “a master plan” for Miami aimed at diversifying its business landscape and attracting educational and cultural offerings by marketing the city as a global commerce hub.

“We need to design a neighborhood, a community,” he said. “It’s a big project.”

Two major milestones for the Puerto Rican center and chamber project remain in 2020. By Aug. 1, Mr. Mana must obtain permits. Within a month after that date, he must begin construction.

Mr. Salomon said that while he’s confident those deadlines will be met, he’s open to extending the timeline if the developer continues to respond to questions and concerns in a timely manner.

“They’ve been very diligent about this,” he said. “As long as there’s a constant flow of information – questions and answers back and forth, because nobody submits plans without comment; the city will always comment – given what he’s done and how thoroughly he’s done it, I don’t see any problems at the moment.”