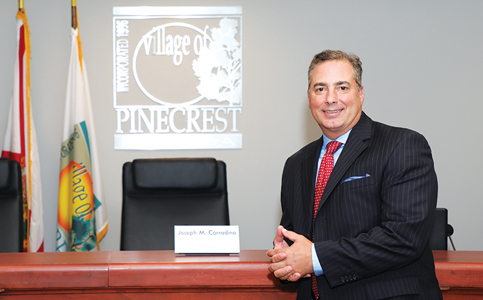 For Pinecrest Mayor Joseph Corradino, 2020 represents a triplet of anniversaries and, if he is elected to a second term in November, yet another.

Twenty-five years ago to the day of his interview last week, March 4, he married his wife, Mia. That same year, he joined his family’s civil engineering firm, The Corradino Group, for which he today serves as president.

One of his first jobs with the company sent him to help the newly formed Village of Pinecrest develop its initial comprehensive plan. The assignment proved serendipitous.

“I found it to be one of the most beautiful places in Miami-Dade County and moved in, started raising a family,” he said. “It was a new city, and I helped out anywhere I could.”

He joined one of the village’s first committees, as well as chambers of commerce and professional technical organizations, serving as president of the American Planning Association, ChamberSOUTH, Doral Business Council and Economic Development Council of South Dade.

After several years on Pinecrest’s planning and zoning board, he ran for a village council seat and won with more than half the total vote. Ten years ago – the third anniversary – he was re-elected with 75% of ballots cast in his favor.

In 2016, voters from the affluent municipality elected him mayor, a responsibility he holds while still steering his growing business, which has changed significantly since he relocated here.

The Corradino Group before had done little municipal work. But seeing the local development community routinely outgun cities here with high-priced attorneys and engineers, he saw an opportunity to fill a niche in the urban planning market while also aiding the growing villages and townships in maintaining control over their futures.

“We wanted to provide the cities with the same level of expertise that the private sector had as they did development, so we gave up all the private sector development work and focused on working with the cities, helping them review development applications and getting them through the process while making sure developers mitigated their impacts as they came in,” he said. “And that’s been successful. Twenty-five years later, we’ve got a thriving municipal practice across the country, from Indiana all the way to the tip of Florida.”