Advertisement
The Newspaper for the Future of Miami
Connect with us:
Front Page » Communities » Ex-manager quickly becomes architect for Palmetto Bay showcase work 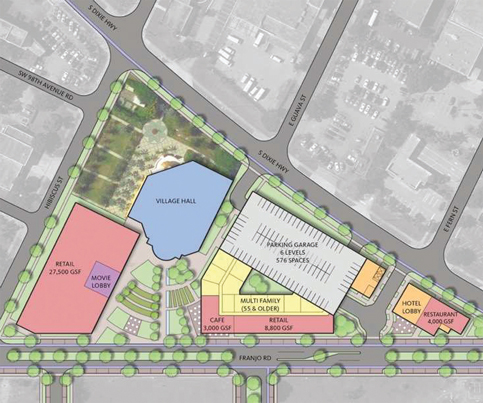 Two major players once thought to be finished with Palmetto Bay’s lengthy effort to transform its downtown area are back in the game, and their return could further delay progress on a new village square.

Real estate firm NAI Miami, the second-ranked respondent to Palmetto Bay’s request for bids to redevelop 4.6 acres off US 1 encompassing Village Hall, did not present updated plans to the village council as expected last month.

The reason: Hagan Properties, one of two private property owners whose lands were originally included in the plan, is instead pursuing a separate development deal for its 1.5 acres there, according to Mayor Karyn Cunningham and Councilman David Singer.

Real estate firm i3 Interests – the top-ranked respondent to the bid request, which in October abruptly ended talks with the village over a $72 million downtown project, citing the “termination” of then-Village Manager Ed Silva as its reason – is working with Hagan.

And Mr. Silva, whose final workday for the village was Jan. 15, is named as Hagan’s architect of record for the Feb. 3 proposal, which includes plans for an eight-story, 71-unit mixed development with ground-floor commercial and retail components.

“My understanding is that NAI is trying to accumulate some interest with existing property owners – not the Hagan property, because that already has an application submitted, but with others – to put together something to potentially present to council,” Ms. Cunningham said Monday.

NAI’s original $14 million proposal would have required the village to take on debt and did not feature some components from i3 Interest’s plan, including entertainment, senior housing and village square pieces.

Since Oct. 29, Palmetto Bay has received eight approval requests for developments within its Downtown Urban Village Zone. Four of those name as their architect of record Mr. Silva and his firm, ESA Inc. Architecture Planning Design.

Village records list Mr. Silva as having resigned, a move he agreed to in exchange for a severance package of $60,000 plus benefits.

Mr. Silva, who also is running for Palmetto Bay vice mayor, said that while his official last day as manager was Jan. 15, he’d been gone since Dec. 5, using leftover sick and vacation days.

But he still didn’t get any calls from potential clients until Jan. 16, he said.

“I’m a private citizen who has an architectural firm, and some think my skill set’s suited for this kind of stuff,” he said. “Before I worked for the village, I was a successful architect, did a lot of work for quite a lot of the big names in South Florida.”

To deliver the four requested designs, ESA Inc. “staff worked around the clock for two weeks,” he said, including “very late at night and weekends to get some of this work out.”

Mr. Singer said it’s “kind of weird” Mr. Silva is the architect on so many new projects in an area whose development he’d worked on as manager of the village, but the decision by private companies to seek him out is not.

“I think when people found out he was no longer going to be employed there – he knew the code best, what they could and couldn’t build – it was easiest for him to go and get all the plans to potential developers,” Mr. Singer said.

A search of state corporate records showed that ESA Inc. has been active since its incorporation on Nov. 19, 1990, including during his tenure as a public employee. Mr. Silva said he’s worked as an architect since 1986.

He became Palmetto Bay’s permanent manager in July 2015 after serving briefly in an interim capacity. Before that, he’d been the village’s director of building and capital projects for about eight years.

At the time of his village appointment, which included a base salary of $175,000 plus $750 in car and cellphone allowances, he told the Miami Herald that his work history would serve his new role well.

Not everyone agreed. The county Commission on Ethics and Public Trust in April 2015 received anonymous correspondence alleging that he “‘stands to gain either directly or indirectly through clients, business partners or proxies’ thanks to [his] position.”

Among the complainant’s points of concern: Mr. Silva’s “very close personal relationship” with the village’s human resources director and his ties with then-Village Attorney Dexter Lehtinen, an in-law who allegedly recommended that the village council give Mr. Silva a pay raise.

In an April 16 memo, Ethics Investigator Robert Steinback wrote that none of the complaints raised any issues under county law, and Mr. Silva’s state-mandated outside employment disclosure forms were in good keeping.

“The investigator finds no further Ethics matter to pursue regarding this investigation,” Mr. Steinback wrote.

On Dec. 30, 2015, the Commission on Ethics again looked into potential conflicts between Mr. Silva’s operation of ESA Inc. and his village work.

At the center of the nearly seven-month investigation was an allegation that he’d hired an employee who “concurrently” worked at both Village Hall and ESA Inc. “to allow [him] to ‘check up on his work as he would otherwise at his private architectural firm.’”

Mr. Steinback, who also conducted this investigation, listed in accompanying documents two additional complaint referrals regarding Mr. Silva, on which the Office of Inspector General declined to take action.

In an interview Jan. 8, 2016, Mr. Silva told Mr. Steinback the employee in question no longer worked at ESA Inc., which was “down to three remaining employees” he expected to release soon “as a result of his gradual termination of the company.”

Mr. Steinback wrote, “After consultation with the Ethics Advocate it was determined that there is insufficient evidence to prove an ethics violation and that this matter should be closed with no further action.”

Asked Tuesday why he has kept ESA Inc. open, Mr. Silva said, “I’ve had people with me for 15-plus years, and I thought I owed it to them to keep it afloat as long as possible.”

While serving as village manager, he said, he maintained but did not seek out new projects or clients and saw little to no earning, with company profits going toward upkeep and employee salaries.

Jose Arrojo, who took over as Commission on Ethics executive director in September 2018, said as long as Mr. Silva filed the requisite employment disclosure forms in a timely manner and refrains for two years from lobbying on behalf of projects to which he’s party, he is within his rights by county standards.

“The town may have requirements above and beyond those contained in the county ordinance,” he said, “but that’s going to be the general bar.”

Mr. Silva said his work, past and present, is “above-board and honest.”

“My skill set is my skill set,” he said. “If I’m blessed with winning an election [for vice mayor], I’d have to either recuse myself from anything that came in front of me or do what I’m going to do, which is walk away from all these projects. I will never, ever have my integrity questioned.”