Advertisement
The Newspaper for the Future of Miami
Connect with us:
Front Page » Government » Complex Miami Riverside plan criticized but advances 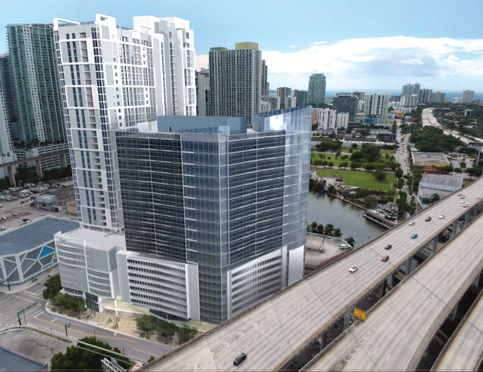 The ambitious plan to provide the City of Miami with a new government administrative building near the current Miami Riverside Center on the Miami River has taken a step forward.

But not before a city review board criticized the proposal for its lack of a grand or distinctive public entrance to the city’s new structure.

The project, with a working title of Riverside Development, comes from Lancelot Miami River LLC, an affiliate of the Adler Group.

The city commission approved an agreement with Lancelot to build a city administrative building to replace the existing building, characterized by city officials as “functionally obsolete.”

The overall plan will free up the city-owned riverfront site for a private mixed-use development from Lancelot.

The administrative office building must be built first. Lancelot presented its plan to construct the office building at 20 stories, and an adjacent private residential building rising 38 stories, on land just north of the existing Riverside Center.

Plans show about 54 bike rack spaces as part of this development.

This is considered a public-private partnership, or P3, and the city is one of those partners, with city officials involved in the planning and design of the city’s new administrative building.

The project was presented to the city’s Urban Development Review Board at its most recent meeting.

Before the vote, portions of a staff memo on aspects of Riverside Development were read into the record by Elia Sorice, a Planner II in the Planning Department.

The memo spelled out several staff comments and concerns remaining, and the document was referenced when the final vote was taken.

The board approved a motion recommending approval of the project, with conditions.

Those conditions included: To try to introduce a new public space at the corner of Third Street and Second Avenue, and to follow the recommendations set forth in the staff memo.

“Through the design review process, the project team has made significant progress in addressing Planning comments related to the overall site configuration and massing given the development program and unique site constraints,” the memo states.

The staff comments and concerns that were remaining included:

■Civic architecture – Incorporate iconic architectural elements that signify this is a government office building. Civic design should evoke a sense of importance and prominence.

■Civic spaces – Optimize forecourt to function as a multi-use transition space. Incorporate landscaping, lighting, public art, and open seating that make this a welcoming “front porch” to the lobby.

■Public Art – Celebrate the civic nature of the project and history of the city through the integration of art in publicly accessible spaces. Integrate public art into hardscape to establish a sense of place that can be carried from exterior to interior spaces.

■Hardscape design – Use hardscape design to create a continuous pedestrian experience, especially across curb cuts. Materials and elevation of sidewalk to be consistent across frontages, minimizing conflict points for pedestrians.

The biggest complaint from board members focused on a lack of “civic design” that would “evoke a sense of importance and prominence.”

And some board members expressed a desire for a master plan for the entire site, including the 1.6 vacant acres at 230 SW Third St. and the city’s waterfront properties.

Mr. Bailine addressed the board and defended the developer’s team.

“This is a very complicated deal,” he told the board, noting the many hours spent between the private developer and city officials.

In regard to city departments and staffs, Mr. Bailine said, “this is operationally good for them.”

Mr. Bailine also said developers could not “legally” show the board any plan for the riverfront site because the needed zoning is “not in place today.”

Not all comments were critical. Board member Ignacio Permuy said, “I happen to like the building a lot. It’s a complex program. The placement of the buildings is well articulated.”

Mr. Permuy added, “Personally, I like this project. I think it’s a good fit for this area.”

Lancelot is also requesting 11 waivers for the project, including a request to allow up to a 30% reduction in required parking for a project close to public transit.

City officials in 2015 said the Miami Riverside Center, a former Florida Power & Light office building, was “functionally obsolete” and needed replacement. They said the government office building at 444 SW Second Ave. was not the “highest and best use” of the waterfront site.

In seeking proposals for a new office building, city leaders decided to offer up the riverfront site to a private developer, for sale or lease.

Two proposers showed interest but in the end only one bidder remained: Lancelot Miami River LLC.

In July 2018, Adler representatives presented a development plan to the city commission that included a hotel on the river, along with about 37,000 square feet of stores framed by three to four towers, and improved public access to the water.

To accomplish this, Lancelot sought a long-term lease with option to buy the city-owned property at 444 and 460 SW Second Ave. – Miami Riverside Center.

A key part of the deal is construction of a new office complex for the city.

The city charter requires voter approval of the lease or sale of city-owned waterfront property. The question went before voters and was approved.

At a meeting in January 2019, on a split vote of 3 to 2, the commission selected the adjacent site for construction of a new office facility, after objections from Manolo Reyes and Joe Carollo, the two “no” votes. Neither was on the commission when the idea of the public-private partnership first surfaced.