Advertisement
The Newspaper for the Future of Miami
Connect with us:
Front Page » Opinion » By attacking tourism marketing, House buries head in sand

With spreading coronavirus hammering travel and shutting out major meetings and events, the Florida Legislature is kicking our visitor industry as it stumbles.

“The travel and tourism industries are facing their worst crisis since the 2001 terrorist attacks,” a Washington Post article put it Friday.

At this worst possible time, legislators want to yank away taxes that law earmarks for tourism and redirect them.

It’s as if with health services set to battle coronavirus, legislators decided to shift health funds elsewhere. That would make as much sense as cutting funds that build tourism just as the industry needs help most.

As we wrote last week, a current bill would bite into the statewide food and beverage tax devoted to tourism to use for environmental aims, then take 30% of the separate tourist tax for similar use. That would strip $27 million from the Greater Miami Convention & Visitors Bureau, which markets meetings, conventions and tourism in Miami-Dade County.

We all support environmental spending. And education. And health. And any of dozens of other very worthy uses of state funds.

But this bill aims not at aiding other needs but at stripping money from the visitor industry. It comes from the House, where speaker José Oliva until Friday was working to abolish state-level tourism promotion, just as this bill seeks to undercut visitor promotion at the county level. 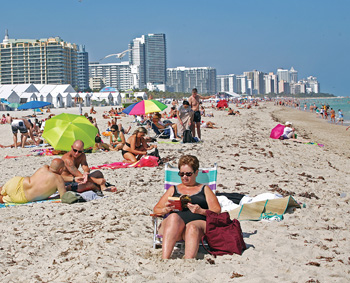 Threat to local tourism promotion ignores the pivotal position of the industry in Florida.

But even Mr. Oliva – who for years has fought Visit Florida’s marketing on the misguided theory that ever-increasing visitors will always show up with no sales promotion – had to end opposition last week in the face of the coronavirus.

“They really are an amazing marketing company, they have made us believe that they should exist,” he was quoted as saying in halting a bid to kill off Visit Florida.

Reps. Oliva and Avila, who live in Miami-Dade, ought to be able to tell you how many of their friends and neighbors would be directly hit if the visitor industry doesn’t invest heavily in coming months to help counter the economic impact of coronavirus and ramp up a rapid comeback.

They should also remember how the tax dollars they’re trying to snatch combated the Zika virus scare a few years ago and kept visitors flowing here and people working in the industry.

Tourism is pivotal outside of Miami-Dade, too, with 1.29 million Florida jobs directly in leisure and hospitality out of the state’s 10.12 million – one of every eight. How could a legislature be so oblivious as to slash funds that shore up tourism just as a deadly threat to our future looms?

The legislature is to end its annual meeting this week, but leaders plan on overtime to craft a budget. Mr. Avila’s 137-page tax bill may be in play up to the end.

First, over decades Miami’s visitors have become home and condo owners, then investors, and then business owners, creating new jobs. Many of us come from elsewhere.

That promotional network was knit together when the Greater Miami Convention & Visitors Bureau formed 35 years ago with taxes funneled to its marketing. Before that, each city marketed itself, with overlapping efforts that competed internally rather than with the globe and small budgets that couldn’t make big things happen. The Avila bill would splinter control of funding among all the municipalities again, cutting into marketing impact and coordination.

Rep. Oliva says everyone knows about us, but it happens by spending, not by chance. It’s like Coca-Cola – the world says Coke, but only because of a century of ads. Coke doesn’t stop promoting globally, and neither should we.

Yes, Miami is great for meetings and visits, but we must keep telling that story, never more so than in the face of a health threat that won’t soon be forgotten. We have to promote honestly, but we need to ratchet up many notches, not hide.

Florida’s legislature must not make local tourism bury its head in the sand at the very time we should be selling that sand – and our other assets. Where would you find less contagion than on the beach?

By the time you read this, this year’s tax problem might be solved. It’s a fast-moving issue.

But without legislators understanding the pivotal position of the visitor industry so that they buy into the need to keep it growing in a fast-growing state, the threat to local visitor promotion funds will return again and again.

As the industry used to shout, tourism is everybody’s business.