Advertisement
The Newspaper for the Future of Miami
Connect with us:
Front Page » Top Stories » As Miami Worldcenter rises, deals to sell its land continue

As Miami Worldcenter rises, deals to sell its land continue 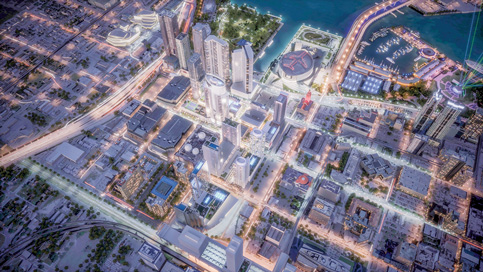 Even as the giant Miami Worldcenter builds up and out, deals continue to take place.

Recently, Miami Worldcenter Associates sold a 1-acre parcel for $27 million, and Miami’s Urban Development Review Board voted unanimously to recommend approval of the 52-story Miami World Tower, which will house 560 residential units and about 3,000 square feet of commercial space.

The 44,635-square-foot parcel, at North Miami Avenue between North Ninth and 10th streets, “is zoned for a mixed-use development integrated within the project’s master plan,” a release by Miami Worldcenter said. “Following this sale, one developable block remains available for purchase within Miami Worldcenter – located along Northeast First Avenue between Northeast 10th and 11th Streets. The parcel encompasses approximately 2.18 acres, with base development capacity of nearly 1,100 residential units and 1.7 million square feet.”

Miami World Tower is slated to be 834,795 square feet, including parking for 421 vehicles and 22 spaces for bicycles. It would be just south of, and adjacent to, the NAP of the Americas data center, which is not part of Miami Worldcenter.

“The 60-story Paramount Miami condominium – which is more than 90% sold to buyers from 56 countries – and the 43-story Caoba apartment tower – which is currently more than 85% leased to full-time renters – were completed last year, with both towers currently open and welcoming residents,” a Miami Worldcenter release said.

“Last year was transformative for Miami Worldcenter, as we finally welcomed our first residents to Caoba, and then Paramount,” said Nitin Motwani, managing partner of Miami Worldcenter Associates, via email.

“Once we open the 300,000 square feet of street-level retail and our first hotel, citizenM, by the end of 2021, our residents and visitors will reap the benefits of the city-within-a-city community we set out to build 15 years ago,” Mr. Motwani said.

According to the release, several future developments are on the way:

■Royal Palm Companies has launched sales for the Legacy Hotel & Residences, which will include 278 branded condo-hotel units accompanied by 256 hotel rooms. The project is expected to break ground later this year.

■Hines is preparing to build a new 600,000-square-foot Class A office-led tower, with multifamily apartments and retail space. Construction is expected to begin in 2021.

■MDM Group is planning the 1,700-room Marriott Marquis Miami Worldcenter Hotel & Expo Center, which will include an adjacent 500,000 square feet of convention space. Construction is expected to begin this year.

“As the development of Miami Worldcenter’s master plan continues to move forward and residents fill our newest residential towers, we continue to experience heightened interest from investors who see value in aligning with our world-class team of developers to create a city within a city in the heart of Downtown Miami,” Mr. Motwani said.

“Getting people out of their cars and on their feet has been a huge priority for us, and we have designed spaces within the 27-acre master plan that enhance the quality of life for residents, businesses and visitors,” Mr. Motwani said. “Our sidewalks are exceptionally wide and feature lush landscaping and lighting, creating a safe and inviting experience for pedestrians. We have also designed streets that facilitate ride sharing and increased delivery services, preventing traffic build-ups and improving safety. Worldsquare, a 20,000-square-foot public park, will serve as the heartbeat of Worldcenter, and a much-needed green space for all of downtown Miami.”

“Occupying 27 acres in the heart of downtown Miami, Miami Worldcenter is one of the largest private real estate developments underway in the United States and the largest private development underway in Florida,” the release said. “The 10-block project will include world-class retail, hospitality, commercial and residential uses in the center of Miami’s urban core. All told, the project is expected to account for $4 billion in new investment in downtown Miami.”

“We are transforming a once blighted area of downtown Miami into a bustling community with residential, retail, entertainment, offices and hotels – even one with an expo center,” Mr. Motwani said. “Our location, nestled between two of Miami’s major arteries, connected by all five local transit systems, and within walking distance to the city’s most prominent cultural institutions, puts Miami Worldcenter on the map as downtown’s new center of gravity.”