Advertisement
The Newspaper for the Future of Miami
Connect with us:
Front Page » Transportation » $5 billion Miami International Airport upgrade ready for takeoff 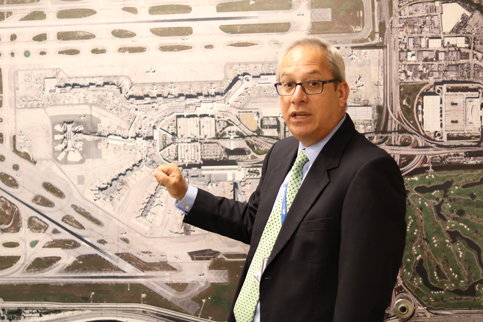 Unlike prior MIA improvement programs, Aviation Director Lester Sola said, the projects can “start and stop as needed, depending on the economic conditions,” providing flexibility in modernizing the hub.

“If we have to slow down or defer a project, we are still able to utilize the terminals,” he said.

A hearing over the massive bonds issue at County Hall is set for March 17. Commissioners gave the bonds a first OK March 3.

Projects at MIA break down into five “sub-programs” targeting MIA’s North, South and Central terminals, cargo facilities and a mix of other upgrades, including up to two new on-site hotels, a memo from Deputy Mayor Ed Marquez said.

A “gate optimization project” at the North Terminal is to modernize 23 gates to handle larger aircraft and renovate the terminal’s frontage to reduce backups.

Another project at American Airlines’ “American Eagle” facility in Concourse D would grow the number of flights by large regional jets and add capacious holdrooms with a wider array of concession offerings.

Three jumbo jet gates are to be added at the South Terminal, which is to get an apron expansion allowing three more wide-body planes to park there.

The terminal’s Concourse G, which Mr. Sola said is more a hindrance than an asset, is to be demolished.

That won’t reduce capacity. Giving planes more room to move, he said, will cut back on bottlenecks that tie up movements at Concourses G and F.

The Central Terminal is also to get new concession areas, a raised roof for more natural light and a queuing space similar to the other two terminals.

The airport’s western cargo facility is to gain a taxiway, fuel tender and fumigation facility, among other things.

In addition to adding hotels – one east of the Dolphin Garage across from the North Terminal and the other above the existing short-term parking deck central to all terminals – improvements include roadway and bridge enhancements, relocation of some tenants, a bus maintenance facility and other unspecified projects at the North and South terminals.

Of 46 projects listed in Mr. Marquez’s memo, four are for county airports other than MIA and just one – construction of a new air traffic control tower at Miami Executive Airport – is non-roadway related.

While the bonds issue still needs final approval, projects in the plan totaling $984 million are already underway, paid for by commercial paper notes in lieu of bond proceeds.

To continue funding the plan, Mr. Marquez wrote, approval of the bonds issue is needed by July.