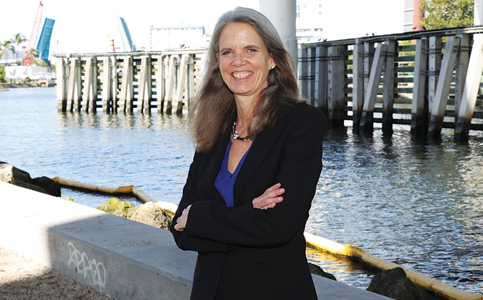 As effects of climate change pose an ever-increasing threat, the City of Miami has had to ramp up efforts to become a more resilient city.

With the $400 million Miami Forever Bond in its arsenal, the city has been making strides. Recently the city rolled out Miami Forever Climate Ready, its strategy for 40 years to mitigate flood, heat and storm impacts.

At the center of it all is Jane Gilbert, the city’s first chief resilience officer, who stepped into the position in October 2016. A problem solver, she takes a system approach to address challenges and issues. She calls her role the most challenging she’s ever had as well as the most engaging and exciting.

She came to the city having worked in both the nonprofit and private sectors, including as executive director of Oolite Arts, previously named ArtCenter/South Florida, and as leading Wells Fargo’s philanthropy and community affairs in South Florida, where she focused on educational and environmental issues.

To meet the moment, Ms. Gilbert has stressed the need to rethink our lives: “It’s going to be accepting change as your constant and a shift in the way that we do business, the way we move, the way we live.”