Advertisement
The Newspaper for the Future of Miami
Connect with us:
Front Page » Business & Finance » Challenge to Melreese lease enters appeals court 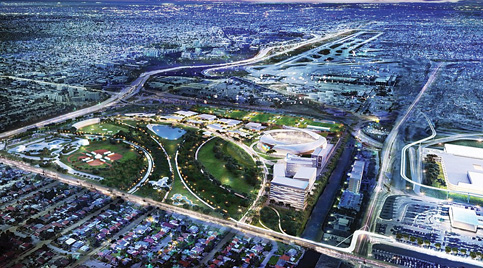 An advocate for green space continues to battle the legality of a referendum that cleared the way for the City of Miami to waive bidding for the development of the Melreese golf course site.

Bruce Matheson has appealed a district court judge’s ruling that struck down his challenge to the voter referendum that allowed the city to engage in non-competitive negotiations with Miami Freedom Park LLC. The developer is proposing a transformation of 73 acres in Melreese that would include a 25,000-seat soccer stadium and more than a million square feet of office, commercial and retail space. The city would receive a minimum of more than $3.5 million a year for rent and receive $20 million over 30 years for the development of a 58-acre city park or green space in Melreese.

The district court judge found that the charter amendment title and summary adequately informed Miami residents that they were voting for the city to negotiate a lease of Melreese for a soccer stadium and the material terms listed in the referendum, which also included the minimum rent to be paid, the property location and ancillary facilities. The judge also found that voters were told that bidding would be waived.

“It would be unreasonable and untenable to include all possible lease terms in a 75-word ballot description,” the summary judgment reads. “The summary explains the essential details of the proposed changes to the City’s Charter within the 75-word limit. It is not clearly and conclusively defective as is required to strike it under the law.”
The summary judgment also claims the referendum does not violate the city charter’s requirement to institute competitive bidding because it was an amendment to the city charter.

Now the case is before the 3rd District Court of Appeal. According to the reply brief on behalf of Mr. Matheson, the “trial court applied the wrong standard by requiring Matheson to demonstrate both a hidden purpose and the existence of misleading ballot language.”

The reply brief also states the ballot language misled voters by not clearly stating they would forfeit their rights to competitive bidding and a fair market value for the lease of the property.

In an email exchange, Enrique Arana, who is representing Mr. Matheson, said they are confident the appellate court will reverse the lower court’s ruling.

“The ballot was misleading and carefully crafted to camouflage that its chief purpose was to eliminate the important competitive bidding protections of the City Charter for a proposed lease of one of the City’s most valuable pieces of land and largest unencumbered municipal green space,” he wrote. “The City’s ballot was designed to pass rather than inform. This is not the standard by which state law requires the accuracy of ballots to be measured.”

“The referendum is flawed from the language that they used to put in front of the voter,” Mr. Matheson told Miami Today. “The golf course should remain open green space, not converted to a mall larger than Dadeland.”
The city attorney’s office could not be reached for comment.

The Matheson family won a legal battle preventing further commercial development in Key Biscayne’s Crandon Park, in effect bringing an end to The Miami Open tennis tournament. The family Matheson deeded the park to the county back in 1940.

Mr. Matheson also filed a lawsuit against the county’s conveyance of its three-acre Overtown property that had been previously considered as a location for the soccer stadium, with the 3rd District Court of Appeal striking down his challenge.

He also challenged Miami Mayor Francis Suarez’s strong-mayor initiative, claiming it would’ve been a violation of sunshine law. He withdrew the case the day after the majority of city residents voted against the referendum.