Advertisement
The Newspaper for the Future of Miami
Connect with us:
Front Page » Top Stories » Health tech concentrator decoding a matrix of puzzles 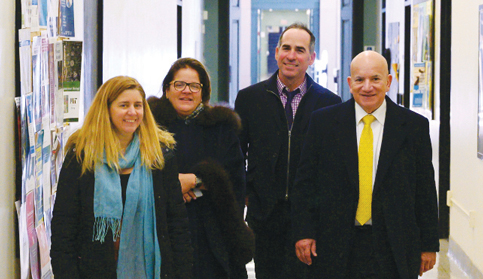 Imagine a home with floor sensors that can tell whether a person’s imbalanced gait is indicative of a blood circulation disorder, or a toilet that automatically tests urine for signs of kidney disease or diabetes. One of the two – the toilet – already exists. The other is on its way.

Now imagine a home with dozens if not hundreds of such gadgets, all communicating with one another and able to adapt to a person’s needs as he or she ages and grows more susceptible to illness.

That’s one project in a complex matrix of puzzles researchers from MIT’s Institute of Medical Engineering and Science hope to decode with local scientists, entrepreneurs and investors at the Global CoCreation Lab (GCL), a new health technology concentrator in Miami.

Healthcare is a multi-stakeholder industry whose components make critical but interrelated decisions. A doctor decides to prescribe, a hospital opts to admit patients and a regulator like the FDA supervises and approves medication.

Because each choice along the way helps to determine a person’s treatment outcome, it takes a holistic approach to truly improve how healthcare is delivered to consumers, said Alejandro Roman, GCL executive director.

“With so many inputs, it’s important to collaborate, to cooperate and work in a way where we’re aware of the philosophy of co-creation,” he told Miami Today. “We need to have access to people’s experience and wisdom in order to have advances society will adopt.”

Those problems and their possible solutions are then viewed in terms of setting: inpatient, outpatient, at home and in the community.

Take someone diagnosed with Parkinson’s disease for example, he said. The person at the onset of the disease is much more physically able than in subsequent stages.

“Should the house of that person evolve as the disease evolves in terms of mobility access, sensing or minimizing fall risks, etcetera? Can the home be a device?” he asked. “When you have those questions, you elicit excitement in researchers.”

Some of the questions GCL researchers want to answer have international roots, in many cases from countries where MIT has set up an International Science and Technology Initiative program to aid education in science, technology, engineering, arts and mathematics.

More than 20 of those programs exist around the world, including in Australia, Brazil, China, France, Germany, Israel, Japan, Russia and South Africa.

The founder of one such program in Spain, Dr. Mercedes Balcells-Camps, serves as program director of GCL, which itself has an educational component already working with Miami-Dade Public Schools.

GCL’s origin stems from an April 2019 visit to MIT by Mayor Giménez and Leland Salomon, assistant director of the county Regulatory and Economic Resources Department, among others.

“[The mayor] realized there’s a talent pool from the ivory towers of Cambridge, and that talent pool needs a community to be able to reach out to in order to implement the talent and innovation coming from there,” said Lourdes Castillo, GCL director of government affairs and strategic partnership. “The reason South Florida was so important to MIT is that the diversity and genetic composition of Miamians will be the genetic composition for the rest of the Americas in about 20 years. If we attack health issues facing this community, we can improve the wellbeing and health of Miamians and can transfer that to the health and wellbeing of Americans and the rest of the world.”

Shortly after the visit, a Nov. 20 county release said, the Giménez administration gave tech event eMerge Americas $250,000 to help set up the lab here. County lawmakers later OK’d another $1 million to fund the lab through 2021.

Part of the allure, Ms. Castillo said, is the potential to create a “Silicon Beach” here – South Florida’s answer to the valley in Northern California that is home tech giants Google, Apple, Facebook and Yahoo.

“It’s MIT staff and professors coming into our marketplace and joint-venturing with our hospitals, educational institutions, philanthropic community and industrial development community – all these things that create solutions to problems,” Mr. Salomon said. “Once you create those groups and focus on specific problems, there are opportunities to turn those groups into businesses [that] at some point will hire people. So it’s good for jobs, revenue and the community, period, and all the while producing something that will help to solve major medical issues.”

GCL, a state-registered nonprofit, operates in a co-working space called Pipeline Brickell with 16 “main contributors,” Mr. Roman said, many of whom relocated with him. Participation “in the broader community” here and around the country could be some 60 people.

Two ideas now being studied at the lab and MIT’s Boston headquarters include women’s bras embedded with “smart fibers” that improve female-specific clinical care and new medical devices that help to speed on-site treatments by industry professionals who, by being able treat more patients, could see their wages increase.

Not all groupings seem a natural fit at first. But it’s the “nontraditional partnerships,” he said, that make GCL’s approach to inventing new healthcare solutions so potentially game-changing.

“Can a real estate developer be a participant as a healthcare innovator?” he said. “The obvious answer is a resounding ‘no,’ but when you dig deeper into the question you realize that real estate developers are not only good [partners in that effort] but, as aging demographics and the cost of quality care starts to shift to the home setting, [they] could play a pivotal role.”

That concept grew legs in January, when GCL launched a joint venture with affordable housing builder Related Urban, a subsidiary of the Related Cos.

The mayor called it “just the first [of] a series of collaborations with MIT and different partners … to develop new health technologies” with both a local impact and a worldwide benefit.

“We told Related, ‘You’re one of the largest developers in Miami-Dade, [and] this would be a phenomenal opportunity, where you have a development of 200 to 300 units in which you can put in this kind of [illness detection] technology,” Mr. Salomon said. “And [the county] can, through a third party, put in some type of clinic to see what we can do [to treat patients closer to home].”

Beyond providing a reliable, rolling funding source for the project, the county’s planned million-dollar yearly infusion to GCL is also a buy-in for any profits from successful technologies that result from the lab’s research, the mayor said.

“If we have a hand in developing technology that’s a hit, actually we get that revenue for the people of Miami-Dade County,” he said. “We can lower your taxes, so it’s good all around.”

Leaving a lasting economic impact is paramount to the lab’s mission, Mr. Roman said, and as such he and other leaders at the lab will attribute more weight to projects that show greater financial viability and attract big industry participants.

“Take pharmaceuticals or medical devices, a $150 billion industry. What share does Miami have? How do we create those attracting conditions for other industries or create technology-based services to [bring] Miami [into] the value chain of established, knowledge-based industries?” he asked. “Through this partnership, many of this community’s comparative advantages could be turned into 21st Century competitive advantages.”

One Response to Health tech concentrator decoding a matrix of puzzles