Advertisement
The Newspaper for the Future of Miami
Connect with us:
Front Page » Real Estate » 52-story Miami World Tower wins board backing 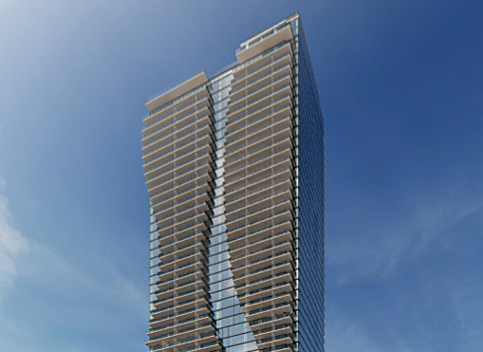 Another skyscraper is coming to Miami Worldcenter, serving to further build out the evolving Park West neighborhood north of downtown Miami.

The latest project is Miami World Tower, planned for Block E of the sweeping development, at 700 NE First St.

The new building is designed at 52 stories, to be home to 560 residential units and about 3,136 square feet of commercial-retail space.

The site borders the Miami Worldcenter pedestrian promenade, rising up from what used to be Seventh Street.

At its most recent meeting, the city’s Urban Development Review Board voted unanimously to recommend approval of the tower. Most board members generally liked the proposal and one even referred to the new tower as “sexy.”

Owner-developer Miami World Towers LLC said the new building will be 834,795 square feet, including a parking pedestal to accommodate about 421 vehicles. Documents show there will be 22 spaces for bicycles.

The city’s zoning code calls for minimum open space at 10%, and the developer has submitted a warrant request to allow 9%.

Attorney Javier F. Aviñó, representing the owner-developer, in a letter to the city wrote: “The Project is located within the heart of the Miami Worldcenter development. In contrast to most buildings in the surrounding area, Miami World Tower aims to break away from the rigid and orthogonal language typical of many residential towers … the building is a simple and efficient rectangle that maximizes daylight into, and views out of, each unit.

“On the east and west elevations, however, a contrast between shifting balcony profiles and areas of clean, uninterrupted glass results in the expression of fluid, sensuous curves.

“On the south side, balconies extend beyond the edge of the building, swaying in and out again as they move upward, resembling wave crests approaching the shore. The overall effect is that of a building in motion, where portions appear to be carved out or eroded, revealing a new layer underneath,” he wrote.

The new tower is planned for the easternmost portion of Block E and is the first of three development phases to be constructed. Block E is bordered by North Miami Avenue on the west, Northeast Eighth Street on the north, Northeast First Avenue on the east and the Miami Worldcenter promenade (Seventh Street) on the south.

It is adjacent to and south of the NAP of the Americas data center, which is not part of the Worldcenter project.

The new tower is to rise within a few blocks of multiple Miami-Dade County Metromover and Metrorail stations, including Virgin MiamiCentral, formerly MiamiCentral, a mixed-use transportation hub.

The planned commercial-retail space on the ground floor of Miami World Tower is designed to activate the streetscape and pedestrian realm, said Mr. Aviñó,

Bruce Brosch of architectural firm of Nichols Brosch Wurst Wolfe & Associates began his presentation about the latest tower showing a short video of the overall development and site.

Within the urban grid that is Miami, the Miami Worldcenter development is “a district in and of itself, with unique experiences,” according to the video.

“It’s worth noting that at the second floor, we lined the entire garage with habitable units,” said Mr. Brosch.

Another member of the developer’s team noted they wanted to break away from the traditional look of a residential tower, and designers used the influence of Biscayne Bay and the Miami River to provide movement through the play of balconies, resulting in “fluid sensuous curves.”

Board member Ignacio Permuy said, “I like the massing and scale, and I happen to like the articulation of the façade … it works at the pedestrian scale and also the half block, block and several block scale. I think it works very well.”

Board member Fidel Perez said, “It’s a sexy building. It has a lot of curves … you’ve done a good job.”

Mr. Perez questioned why there appear to be two different façades on the parking levels and on one it has exposed openings. “At the end of the day, it’ll look like any other parking garage in Miami,” he said.

He also recommended not having any residential units open up onto the swimming pool area on the amenity level.

Mr. Brosch responded saying the construction on the site will be in phases and the west façade is considered temporary.

“We will start phase 2 right after or while phase 1 is [under construction] … it’s not a frontage for us; it is an interior for us.”

Worldcenter is a collaboration of Miami Worldcenter Associates and a team of development, design and engineering firms.

The full project promises a mix of residential towers, hotels, retail stores, restaurants, entertainment venues and a convention center to an area hugged by AmericanAirlines Arena and Virgin MiamiCentral.

A major component of the long-awaited Worldcenter is its shopping center, stretching from the FEC railroad tracks northward to Northeast Tenth Street.

One Response to 52-story Miami World Tower wins board backing