Advertisement
The Newspaper for the Future of Miami
Connect with us:
Front Page » Transportation » Weekend set aside to help Biscayne Green take root 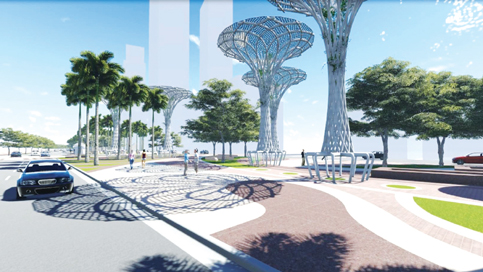 April 17 to 19 has been set as the date for Biscayne Green Weekend, a demonstration project that will showcase how a fully imagined Biscayne Green, a project of the Downtown Development Authority, would look and feel if the project continues to fruition.

Details are sketchy – other than that the weekend will kick off with a lunch on Friday and continue through Sunday afternoon – but plans are expected to be fleshed out at the authority’s next meeting of the Urbanism Committee March 6.

Authority directors last month voted unanimously to back event – three days of activations and programming designed to spark community involvement – and fund it at $65,000.

Biscayne Green, a long-standing authority project, aims to create a grand promenade, as exists in many European capitals, on Biscayne Boulevard by closing some traffic lanes from Southeast First to Northeast Eighth streets. A lane elimination study is underway to gauge possible effects on traffic.

In addition to connecting the city with Biscayne Bay, the promenade would include sitting areas, green spaces, and “activations” including art exhibits and other attractions that would invite people out of their cars.

Even the Miami Parking Authority, facing an annual loss $1.5 million from the spaces that will be removed, has endorsed the plan. In June 2016, the parking board unanimously approved a new memorandum of understanding with the downtown authority.

“We talked to the DDA about our role,” said Art Noriega, parking authority CEO, at that time. “This anticipates a very good working relationship with the DDA.”