Advertisement
The Newspaper for the Future of Miami
Connect with us:
Front Page » Profile » Tim Meerbott: Cutler Bay Mayor plans for a community gathering site 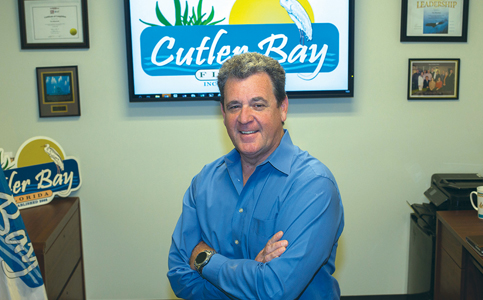 Tim Meerbott’s first year as Cutler Bay mayor came at a pivotal time for the municipality. After more than a decade of operating in a space too big for its needs, the town’s government was close to securing a $17 million land swap deal to relocate its town hall and build a surrounding congregation space for residents.

The project – the deal for which closed last month – is one of many he hopes to initiate in his first four-year term. Others, aside from a potentially game-changing redevelopment of the space where Southland Mall now stands, share a common thread familiar to all Miami-Dade residents: traffic.

“I want to make sure we’re working with the Beacon Council, South Dade Chamber and ChamberSOUTH to bring employers to the community to provide relief, because while I can’t fix the traffic or build more roads, I can bring businesses here,” he said. “If I can’t do that right away, we need to do things to make our commutes easier. That means making sure bus rapid transit [on the South Dade Transitway] moves forward and finding ways to satisfy that last mile so people can get from their homes to the busway. It’s also exploring options like opening the bridges on 87th and 77th avenues so traffic can flow like originally designed and intended.”

To stanch further congestion, the mayor recently called for a building moratorium to help local policymakers examine the methods by which developers forecast traffic impacts.

Proposed developments must include traffic studies to show a project will not hurt roadway service levels. But because a developer itself is responsible for hiring the firm that conducts the study, the resultant figures may not accurate, he said.

“I believe engineers would skew their results in favor of the developer, so I’ve proposed going forward that the developer would pay for the study but the town would conduct it,” he said. “In addition, I insisted that the method used to grade a level of service on a roadway include not only the number of cars that pass through an intersection but also the speed they are traveling. If you look at speed and recognize the cars are only traveling at an average [low speed] rather than the speed limit, it becomes apparent the level of service for the roadway is poor.”

Over the nearly 15 years since Cutler Bay was incorporated, the town’s population has nearly doubled to an estimated 50,000 residents – a number, he said, that would earn him a seat on the influential county Transportation Planning Organization Governing Board.

“It’s important that everyone answers the Census,” he said. “With a seat on the board, I’ll have a much greater impact on making transportation decisions for the south to make sure the needs of our citizens are met.”