Advertisement
The Newspaper for the Future of Miami
Connect with us:
Front Page » Transportation » Smart Plan’s South Corridor ranks high for federal funds 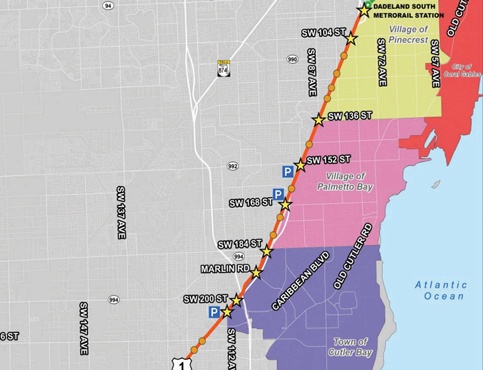 The South Corridor of the Miami-Dade Smart Plan has received high marks from the federal investment arm for local public transit systems, bolstering confidence that the route will yield a maximum funding infusion.

The county transportation department announced Feb. 11 that the South Corridor, the longest of six routes targeted for transit upgrades through the Smart Plan, earned an overall high rating from the Federal Transit Administration (FTA).

Miami-Dade in August requested $100 million in federal Small Starts funds, about a third of the cost to build “gold standard” bus express rapid transit on the existing busway between Kendall and Florida City.

What followed, said county Transportation Director Alice Bravo, was “a very intensive process,” including an analysis of the project’s financial feasibility.

“They did a risk assessment in terms of our cost estimate, and they came back that we’re maybe – in the history of them doing this – one of five cities that they approve their cost estimate on the first review,” she told the county commission’s Transportation and Finance Committee Feb. 12. “Now they continue what they call a readiness review, and they’re vetting all our documents, agreements, utilities that need to be relocated, etcetera, so that they can get to the point where they make the funding recommendation. And certainly getting the high rating makes us a very high candidate for getting that funding recommendation.”

The high overall rating “is a critical step toward getting the federal grant funding necessary to move this project forward,” county Mayor Carlos Giménez said in a prepared statement.

Miami-Dade and the State of Florida have already set aside $99.9 million each for the project, earning it another high rating from the FTA for local financial commitments.

But the agency gave the project medium ratings for land use, economic development and policies for performance and impact, citing medium-low density and job effects among its reasons.

A description of the project on the FTA website shows the total capital cost of the South Corridor as $299.81 million, which doesn’t count $39.28 million for annual operations.

The agency expects that rapid bus on the corridor will serve about 14,700 daily trips once service starts in 2022.

On Aug. 30, 2018, the county transportation planning board voted 15-7 for express rapid bus on the South Corridor, an existing 20-mile, two-lane right-of-way between the Dadeland South Metrorail station and Southwest 344th Street known as the South Dade Transitway.

Opponents of the mode, like Commissioners Daniella Levine Cava and Dennis Moss, whose districts contain most of the area which the route traverses, demanded a long-promised southern Metrorail expansion.

Those in favor pointed to its feasibility, noting it will provide rail-like travel times, service and infrastructure – including prepayment and level boarding at 16 “iconic stations,” as well as traffic signal preemption and crossing gate arms at 45 intersections – at a fraction of the cost of rail.

Before voting, the board agreed to include a provision for a future conversion to rail once weekday ridership reaches 35,000 users.

Asked by Ms. Levine Cava last week for an update on efforts to select a firm to develop the South Corridor through a bid request launched last year, Ms. Bravo confirmed that the process is ongoing but under the county’s “cone of silence” hush ordinance.