Advertisement
The Newspaper for the Future of Miami
Connect with us:
Front Page » Top Stories » Signature bridge foundation next in I-395/SR 836/I-95 remake 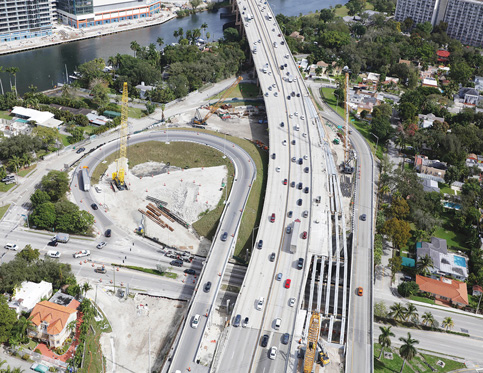 Foundation work for the I-395 “signature bridge” will begin soon, a key feature of the ongoing I-395/SR 836/I-95 Design-Build Project in the heart of Miami.

That is the latest report from the Florida Department of Transportation (FDOT), which says the massive project is well underway throughout the area.

“Large cranes, visible along SR 836 and I-395 from NW 17th Avenue to the MacArthur Causeway, are removing portions of the road and installing auger cast piles (ACP) and concrete piles for new bridge foundations and road widening,” said Oscar Gonzalez III, senior community outreach specialist, in an email to Miami Today.

The work includes the “signature bridge” over Northeast Second Avenue and Biscayne Boulevard, an upper deck of traffic built over SR 836 and the Miami River, and the addition of one lane to the northbound entrance to I-95.

The latest status report from Mr. Gonzalez offers a breakdown of some ongoing work and future activities along the three project corridors.

Up-to-date details about lane closures and other information for area residents and motorists are at the project’s website, www.i-395miami.com.

Arguably the most dramatic change along I-395 is the new suspension bridge over Northeast Second Avenue and Biscayne Boulevard crowned by six rainbow-shaped, 330-foot arches.

“Currently the contractor is driving steel sheet piles into the ground to form a coffer dam for the center pier of the bridge, where the six arches will meet,” Mr. Gonzalez said.

“It will take approximately 128 ACPs to construct the center pier foundation. The sheet pile operation will move west across NE Second Avenue to begin this work at one of the arch locations,” he said.

In March, the Bayshore Drive loop ramp to the eastbound Mac-
Arthur Causeway will be closed to allow for construction of the signature bridge arches and a new ramp.

A temporary left turn on southbound Biscayne Boulevard will provide access onto eastbound MacArthur Causeway until the new ramp opens.

The contractor completed extending the northbound auxiliary lane on I-95 from Northwest 17th Avenue to Northwest 29th Street about two months ago.

To accommodate this extension, the contractor moved the median barrier wall to the west, installed new drainage and concrete pavement and replaced five overhead sign structures.

This lane will receive traffic from the ramp that connects eastbound SR 836 to northbound I-95, which is currently being widened to two lanes as part of the project.

The additional lane on the ramp is expected to open in late 2020.

In addition, workers have begun saw cutting the existing concrete pavement from Northwest Eighth Street to Northwest 29th Street in preparation for concrete replacement that will begin in March, according to Mr. Gonzalez.

These piles will form the foundations for the westbound collector-distributor (local access) roadway. To date, approximately 180 ACPs have been installed.

Widening on SR 836, being constructed in coordination with the Miami-Dade Expressway Authority, is ongoing from Northwest 17th Avenue to the Miami River Bridge and from Northwest 12th Street to I-95.

“Bridge foundations, columns and caps are being constructed to allow for widening the eastbound SR 836 ramp to northbound I-95. Traffic was recently shifted on this ramp to accommodate this work,” Mr. Gonzalez wrote.

Traffic was also shifted on the SR 836 Bridge over the Miami River to create a work zone in the median area.

The shift allows the contractor to remove the median barrier wall and construct the foundations and piers that will eventually support the double-decked section of SR 836.

“Removal of sections of the existing westbound I-395 bridge is ongoing to allow for the construction of new bridge foundations.

“Demolition began at NE First Avenue and is moving westward. Demolition is currently underway just west of the FEC railroad tracks. Demolition of sections of eastbound I-395 should begin this month,” Mr. Gonzalez said.

In all, it will take more than 1,900 auger cast piles to complete the I-395 Signature Bridge, eastbound and westbound collector-distributor roadway and the double-decked section of SR 836.

For the Super Bowl this month, several coordination meetings were held with the organizers and lane closures were suspended for nine days to accommodate all the extra traffic generated by Super Bowl events.

Drivers can expect nighttime closures on I-95 during the week and continuous lane closures from 11 p.m. Friday to 5:30 a.m. Monday. Up to two lanes are closed on SR 836 at night and local roads underneath SR 836 are closed as needed when overhead work is taking place.

Nighttime closures should also be anticipated on I-395 and adjacent local roads. You can visit www.i-395miami.com to get lane closure information and sign up to receive project updates.

■The double-decked section of SR 836 will provide a direct connection to the MacArthur Causeway.

■Adding an additional lane to the eastbound SR 836 ramp to northbound I-95, enhancing the flow of traffic and safety.

■I-395 will provide three through lanes in each direction and provide separate connector ramps for traffic to and from I-95.

■The existing I-395 on and off-ramps will be moved west to North Miami Avenue, resulting in improved traffic flow by allowing additional routes for traffic to travel north and south of I-395.

■More than 30 acres of usable space will be created under the I-395 bridge, including a continuous trail from Northwest Third Avenue to Biscayne Boulevard.

■A new pedestrian bridge will be built over the FEC (Brightline) Railroad for safer pedestrian crossing and connectivity.