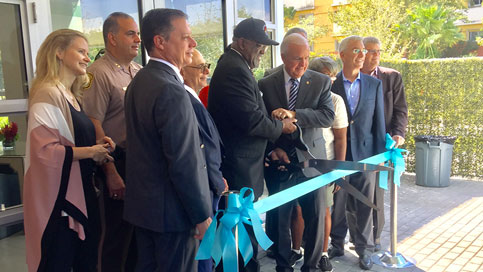 County officials joined developer Pinnacle on Friday to hail the opening of new affordable transit-oriented housing for seniors in South Miami-Dade as they cut the ribbon at the 123-unit, seven-story Caribbean Village.

The project – the first new affordable senior-citizen housing in the area in 25 years – is a public-private partnership among Pinnacle, the South Miami Heights Community Development Corp. and Miami-Dade County, which owns the site at 19755 SW 110th Court.

The project simultaneously meets two major county needs, Mayor Carlos Gimenez told a crowd of officials and early project residents seated outside: the need for affordable housing and the added use of public transit options – Pinnacle built a surface lot next door as a park-and-ride lot for the nearby Miami-Dade County Transitway.

The mayor promised that bus rapid transit that will look and act like a train will be operating on the transitway within two and a half years. And residents, he said, will be pleased that it won’t be as loud as a train – the buses will be electric.

“You’ll be able to sleep very, very quietly,” the mayor said, though the busway can be converted to a rail line “when we have the ridership.”

The project includes 85 one-bedroom and 38 two-bedroom residences – more than was originally planned.

Area county Commissioner Dennis Moss, who worked for the development for a decade, thought the original plan for 82 units was too little to meet the needs of the area’s senior citizens and included a general obligation bond allocation he controlled to help the project to grow.

Commissioner Moss “has been a rock star to us,” said David O. Deutch, a co-founder and partner at Pinnacle, who welcomed guests to the ribbon-cutting.

Mr. Moss for his part gave credit to Mayor Gimenez for also moving the project forward.

“Had it not been his belief in the project even after the additional money I put in, I’m not sure we would be standing here today,” the commissioner said.

The county competitively procured Pinnacle and the South Miami Heights CDC, which has office space in the project, to develop the property.

In addition to contributing land, Miami-Dade loaned nearly $11.5 million earmarked for affordable housing and economic development. Caribbean Village benefits from public-private financing through the issuance of tax-exempt bonds, an allocation of housing tax credits and a $5.3 million loan from Florida Housing Finance Corp., with Citibank N.A. buying both the bonds and the tax credits.

On one side of Caribbean Village is a surface parking lot for 120 vehicles for residents. On the other is the 100-space transit parking lot.

Pinnacle’s investment in art for the building is about $400,000. The county sought proposals for artists and got more than 100 responses. A county committee determined the finalists.

Most residents of Caribbean Village are to have incomes ranging from 30% to 60% of the area median income of about $51,000 per year.

“This has been a long journey,” Commissioner Moss said of the project’s formal opening. “Everyone’s aware that we have a housing crisis in Miami-Dade County, and developments like this are what we need to overcome that crisis.”

As Pinnacle partner Mitchell Friedman introduced county officials and others who helped develop Caribbean Village, someone on the crowded stage bumped a Florida flag, which began falling toward the ground until Pinnacle attorney and former county commissioner Miguel Diaz del la Portilla jumped up from the front row and grabbed it in midair.

“I look at him as our lifesaver,” Mr. Friedman said. “I guess he’s done it again.”