Advertisement
The Newspaper for the Future of Miami
Connect with us:
Front Page » Government » Miami looks at what land can replace its Melreese golf course

Miami looks at what land can replace its Melreese golf course 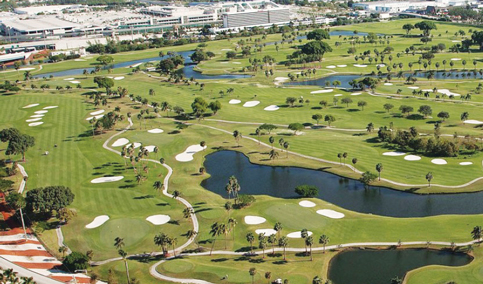 A vote that could have torpedoed a lease to build a mega-project on Melreese Golf Course failed to gain enough Miami City Commission support, as debate provided a glimpse of ongoing negotiations with would-be developer Miami Freedom Park.

Mr. Reyes responded that it was true.

Miami Freedom Park LLC has been working on a lease with the city to transform the 131-acre city-owned golf course just east of Miami International Airport into a billion-dollar development that would include a 25,000-seat professional soccer stadium, a million square feet of office, retail and commercial space, as well as a 58-acre new park to be contributed to the city.

Mr. Reyes has consistently criticized the deal, offering legislation with the potential to doom it. He railed against what he called a disrespect toward the city’s policy that bars net loss of parkland; his legislation would also have disallowed aggregating parks smaller than 40,000 square feet, which is smaller than an acre, toward park replacement.

“Either we accept it or we erase it and stop being liars and hypocrites that we are telling the public out there that we are protecting our parks,” Mr. Reyes said.

Mr. Díaz de la Portilla called the legislation a “poison pill.” With the park in his district, he said he hadn’t decided whether he would vote in favor of leasing the golf course to the developers, saying he was holding out for a “really, really good deal” for the city.

He said that while he would have voted against adding to the ballot the referendum that allowed the city to begin no-bid negotiations with Miami Freedom Park, he stated that a majority of city voters favored the deal.

Iris Escarra, a Greenberg Traurig lawyer who represents Miami Freedom Park, said the developer must replace about 20 acres of parkland of the 73 acres in the lease deal. She said developers are working with the city to find sites for parks in areas where none exist, as well as city-owned land that could be improved to be parkland and sites owned by other jurisdiction.

“We understand we’re under a lot of scrutiny,” she said. “We’ve been very careful in trying to find as big and chunky as possible.”

Commissioner Joe Carollo, while voting for Mr. Reyes’ measure on first reading, acknowledged that passage would kill the deal and said he could change his vote the second time around. He also mentioned he was waiting for golf course land appraisals, which he believed would be higher than the total the developer offered, and said he would like more parkland in his district, which has the least of any commission district.

In 2018, 60% of city voters agreed to waive competitive bidding and allow the city to negotiate the ground lease and deal with Miami Freedom Park. City commissioners are expected to vote in coming months on that agreement, which requires a supermajority of four votes to pass.