Advertisement
The Newspaper for the Future of Miami
Connect with us:
Front Page » Real Estate » Miami Beach entranceway project given a city ‘go’ 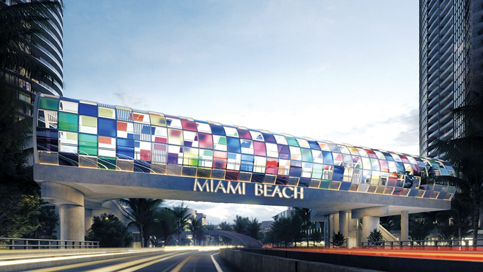 Miami Beach and developers at 500-700 Alton Road have reached a settlement that allows several signature projects to proceed.

The commission agreed last week to settle with Park on Fifth developers after the city Board of Adjustment sided with developers’ interpretation of the city’s decades-old calculation of floor area ratio that excludes covered stairs, elevator shafts, mechanical chutes and chases. The city is appealing the board’s decision.

The settlement clears the way to construct a 330-unit tower as well as a 3-acre park to be conveyed to the city and a kaleidoscopic bridge to soar over Fifth Street by the MacArthur Causeway.

The final obstacle was the city’s request to developers for $750,000 to indemnify them from other potential lawsuits. The developers, however, said they would pay only $200,000 plus reimburse the city $270,000 for legal fees incurred in the dispute.

Commissioners weighed whether the $200,000 would be adequate, expecting similar cases. City outside counsel Jeffrey Bass had identified five potential claimants.

Commissioner Ricky Arriola then asked for $300,000, to which the developers acceded.

”I’m pretty certain that every one of my colleagues and I as well as the city attorneys have tried very hard to defend the sanctity of the city zoning,” Mayor Dan Gelber said. “Sometimes you make a decision to settle something because you realize there’s a risk if you litigate it.”

One Response to Miami Beach entranceway project given a city ‘go’