Advertisement
The Newspaper for the Future of Miami
Connect with us:
Front Page » Business & Finance » Workaround funds three transit-oriented developments 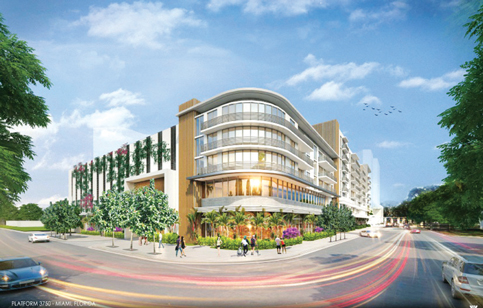 Three transit-oriented developments will receive millions in tax subsidies from a program into which none enrolled, by way of a new workaround that local lawmakers approved to advance affordable housing throughout the county.

■Metro Grande Apartments, a housing and commercial development on the southern portion of the Okeechobee Metrorail Station at 2005 Okeechobee Road.

The funding will come from the county’s Documentary Stamp Surtax Program, named for the stamp of approval applied to local property transfers. For more than three decades, the stamp surtax program has been the largest local source of construction financing for affordable housing.

The program charges 60 cents per $100 on county-issued mortgages or property changes forms, plus another 45 cents per $100 charged per localized commercial real estate deal.

Developers with affordable housing projects may seek funds from the program through a competitive process in which county staff evaluate them on a variety of factors, including the need for and feasibility of their projects.

But since the stamp surtax program started in 1984, several other county and municipal entities have created similar but separate competitive evaluation processes.

Under the new rules, a project can qualify for stamp surtax funds without having to go through the program itself if it includes substantial affordable housing, connects to a major county transit corridor and went through a similar competitive process, like ones from the Florida Housing Finance Corporation and Miami-Dade Housing Finance Authority.

The three projects that commissioners OK’d Feb. 4 through a resolution sponsored by Chairwoman Audrey Edmonson and Mr. Moss are among the first wave of planned developments to be cleared for stamp surtax funds that way. All previously went through other competitive selections to win development deals with the county and, as such, are permitted under the revised county strictures to receive stamp surtax dollars.

In an accompanying memo, Deputy Mayor Maurice Kemp wrote that the projects “are important in addressing the housing crisis in Miami-Dade” and together will add nearly 1,000 affordable units.

“These units are being developed in conjunction with commercial or community space that will address the needs of the residents as well as the surrounding neighborhoods,” he said. “Both public and private participation is envisioned…”

Platform 3750 in South Miami will be built by Cornerstone Group, a Hollywood-base firm that specializes in building and managing affordable housing developments.

Commissioners in December 2017 granted the company a 90-year lease for the property in Commissioner Xavier Suarez’s district following a competitive process, to which Cornerstone submitted the highest-rank proposal.

The project, which in addition to residential includes demolishing and rebuilding the Frankie Shannon Rolle Center, office space and ground floor retail space, has been cleared to receive $6.5 million through fiscal 2021-22.

Cornerstone is also behind the Metro Grande Apartments, which will be built on about 1.5 acres now used as a parking lot in Hialeah, represented by Commissioner Esteban Bovo Jr.

Commissioners Oct. 23, 2018, authorized a development lease with Cornerstone for the property after deeming it the highest-ranked bidder on a county-issued request for proposals.

The project, to be built in phases – Metro Grande I, II and III – will comprise three eight-story towers that Mr. Kemp said will include housing for “all income levels, inclusive of approximately 202 elderly housing units, 84 workforce housing units and retail space.”

Metro Grande is to receive $2 million this year, with no further funding allocated, the memo showed.

Quail Roost Transit Village in South Dade, to be built by a local subsidiary of residential real estate firm Atlantic Pacific Companies, will also rise in phases. Phase I will include 140 affordable units of 500 minimum required by the county for the project.

The project will receive $6 million over the next two years.