Advertisement
The Newspaper for the Future of Miami
Connect with us:
Front Page » Communities » Scooters speeding to become permanent on Miami streets 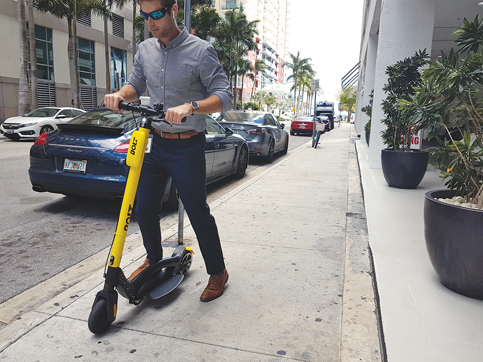 The future for electric scooters in the city of Miami could be six more months, a permanent stay or an abrupt end.

Today (2/13), the city commission is to vote on whether to extend its scooter pilot program through Sept. 1, with the current pilot only given life through Feb. 14. If passed, the city would also solicit vendors as part of a permanent scooter program.

The scooter pilot began last April, after the city sent several prior vendors cease and desist letters. The scooters’ return came with several caveats, including limiting them to the waterfront district that runs from Coconut Grove to Morningside and includes Brickell, Downtown Miami and Edgewater.

Ken Russell, that district’s commissioner, has been the five-member elected body’s strongest supporter of the pilot, saying scooters provide a clean alternative to cars, help solve the coveted first- and last-mile links to mass transit, and help mitigate congestion in the downtown core. Moreover, the city’s profit cut from the scooter pilot has led to more than $1 million for bike lane infrastructure, he has said.

He is sponsoring today’s resolution. The permanent scooter program would still be limited to his district.

Just as he has voiced his support, commissioners Joe Carollo and Manolo Reyes, who was recently appointed as the Downtown Development Authority’s chairman, a position Mr. Russell previously held, have staunchly opposed the pilot, saying the scooters are dangerous, cluttering sidewalks and being used by children.

The draft solicitation online currently states that the city plans to make agreements with up to four firms that provide an on-demand electric scooter sharing systems.

The three-year contracts would have options to renew for two years.

At least nine scooter vendors now operate in the city.

The city would cut more than a third of allowed scooters to 2,499, evenly divided among selected vendors. The city website shows nearly 4,000 currently allowed.

The pilot has allowed vendors to request to increase fleet size by 25% every month if they can average three rides per scooter per day. The draft proposal would allow a fleet increase for vendors that exceed an average four trips per scooter daily, but the size of the increase would be left up to the city.

Under the proposed solicitation, an evaluation committee appointed by the city manager would help rank vendors’ proposals. If the city manager accepts the committee’s award recommendation, it would go to the city commission for final approval.

The proposed solicitation features a 100-point evaluation criteria. The safety, marketing and awareness measure carries a weight of 30 points, more than any other metric. Throughout the solicitation, there is mention of successful proposers instituting proper measures for safety, including highly visible 3-inch ID numbers on both sides of a scooter’s post, and requiring users to “show or scan a photographic identification, which shall be a driver’s license, a state identification, or a passport, which must indicate that every Motorized Scooter User is at least… 18 years old.”

Criticism of the scooter pilot has targeted underage riders. Mr. Russell has introduced several amendments since the pilot took effect, such as $100 fines against each scooter vendor for each instance of underage use.

Chosen vendors would pay the city a minimum $75,000 a year and 30 cents per scooter trip, to be paid in 12-month installments on the 10th day of each month. During the pilot, the city charged each vendor $50,000 to join and reaps $1 daily for each scooter.