Advertisement
The Newspaper for the Future of Miami
Connect with us:
Front Page » Real Estate » Melo Group dual tower rising in heart of downtown Miami 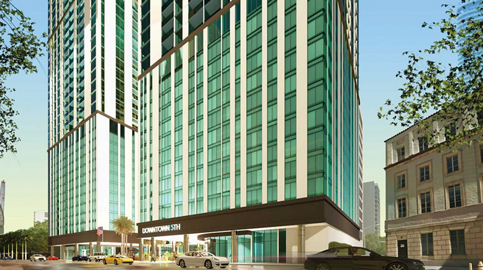 The most ambitious mixed-use residential project from The Melo Group is underway in the heart of Miami’s central business district.

Construction began in late December on a dual tower development called Downtown 5th, at 55 NE Fifth St., with the foundation pour taking place this month as the company plans to go vertical.

The twin 51-story towers are to be home to 1,042 multifamily rental units, with about 12,000 square feet of commercial-retail space on the ground floor.

The property is on Northeast Fifth Street between two Metromover stations, near the Miami Dade College Wolfson Campus. The site is adjacent to Christ Fellowship church and parking lot, which is reportedly closed for renovations.

The towers are designed to be joined with a 12-story garage, offering up about 1,049 parking spaces with some dedicated for use by the church.

The developer will dedicate about 300 of the parking spaces for church use, according to Iris Escarra, an attorney representing The Melo Group.

Amenities are to include a pool deck with two pools and a spa on the 15th floor, in addition to a fitness center and a social room. There will also be a study room on the mezzanine level.

Asked if the company had secured leases for the commercial-retail spaces, a spokesperson responded in an email to Miami Today: “Agreements have not been inked, they’re looking to attract restaurants and retail to service tenants’ everyday needs.”

In the same email, the company released this statement about Downtown 5th: “We’re investing in Downtown Miami’s CBD because we think it’s the next ‘it’ neighborhood in the urban core. We’re continuing to see strong demand for attainable rental product from young professionals and students, to new families and downsizing retirees.

“People these days are placing more value on walkable neighborhoods where they can live, work and play without the weekday commute. Downtown 5th will fill a much-needed void in downtown by addressing two of Miami’s biggest problems: the high-cost of living and traffic,” said the developer.

Completion of the project is estimated in the third or fourth quarter of 2021.

This past summer, the city’s Urban Development Review Board recommended denial of the project. It is an advisory board to the planning director.

Review board members were not happy with a proposed lack of setback and said the project was too much for that site.

Ms. Escarra told the board then that the site is in a unique location where other structures have been built to the lot line.

She said the ground floor is designed with a plaza area to offer a break between the towers, with the plaza creating an open space.

Project architect Arturo Griego told the board it is “a tight site” presenting design challenges, but the plaza and ground floor uses will provide an active front.

The developer requested waivers to:

■Allow for a 4.5% reduction of the minimum parking access aisle width from 23 feet to 22.

■Allow parking to extend into the second layer above the first story along a secondary frontage.

■Allow for the property to be developed to match the “dominant setback in the block” and its context, along Fifth Street.

Ms. Escarra touted The Melo Group’s work, saying that its residential projects are so popular they fill up with eager tenants within two months of availability.