Advertisement
The Newspaper for the Future of Miami
Connect with us:
Front Page » Government » Hard Rock Stadium faces cap on county funding 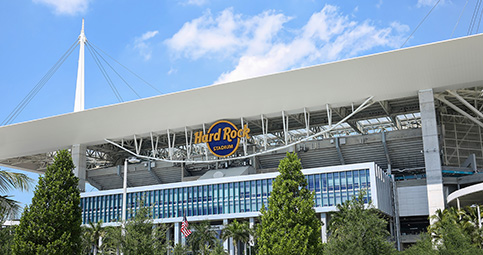 More than $100 million in taxes to reward privately funded upgrades to Hard Rock Stadium could be capped as Miami-Dade today (2/13) considers barring future additions to the deal. A commission OK would bring a final vote March 3.

Barbara Jordan, who sponsored the 2014 vote that created the pact with the Miami Dolphins and two later amendments, is behind the resolution to make its provisions permanent.

She’s also behind a separate proposal to restrict Formula 1 racing at the stadium.

Team owners, in exchange, were to spend $350 million to modernize the stadium and attract large-scale “marquee” events, including the Super Bowl, World Cup and major college football games.

In a 2017 amendment, commissioners OK’d another $1 million in breaks for every year the stadium hosts the Miami Open Tennis Tournament, beginning in 2024.

A July 2018 amendment hiked the annual tax breaks value by $750,000 and required the Dolphins to build a training complex beside the stadium by Sept. 30, 2024. In a July 2018 letter to Mayor Carlos Giménez, Greater Miami Chamber CEO Alfred Sanchez said team owner Stephen Ross agreed to spend $75 million on the complex and its 100 full-time jobs.

The second amendment added to events eligible for tax breaks any “international soccer match or other sporting event which attracts significant tourists … with at least 55,000 paid tickets distributed” and hiked related incentives from $1.5 million to $2.25 million yearly.

The program’s aim, to reward stadium upgrades that boost the economy, tourism and jobs, is far along and needs no more help, Ms. Jordan’s item says: “As such, no further amendments to the Marquee Agreement are necessary or desired, and [it] can simply continue to function until its expiration as originally envisioned.”