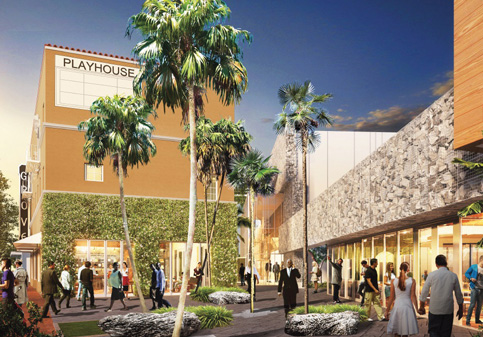 Monday should have been something of a step forward in determining the future of the long-dormant Coconut Grove Playhouse, but progress was once again halted after a judge set to hear the case recused himself.

Oral arguments over the legality of City of Miami Mayor Francis Suarez’s veto of the Miami-Dade County’s plan to demolish and build over a majority of the existing playhouse structure were to have occurred Feb. 3.

But in a surprise move, Judge Thomas Rebull, one of a three-judge panel assigned for months to hear the case, removed himself from the proceedings.

Judges Daryl Trawick and Lisa Walsh, who sent attorneys an order Jan. 30 postponing the oral arguments to an unspecified date, will still preside over the case.

Attorney David Winker, who represents two homeowners living near the property, said no one he spoke to knew why Judge Rebull had suddenly pulled out.

“It was a little weird,” he said. “Why didn’t he do that three months ago? What fact came up that changed that?”

“Whoever the new judge is … will have to go over quite a bit of new material,” Ms. McNulty said. “I’m happy the court takes this seriously and that if they have to reassign it that they gave the judge enough time to get familiar with it.”

Judge Rebull’s recusal marks the latest in a series of false starts related to the playhouse, the last of which took place in September when Miami city attorneys filed for a continuance to submit a response brief in the case.

The state-owned property within City of Miami borders, closed amid financial troubles since 2006, has been leased to the county and Florida International University since 2013.

As previously reported by Miami Today, the lease calls for site restoration and a new modern theater run by theater company GableStage.

The county’s $20 million master plan for the property is to restore the front section of the building, raze the playhouse’s 1,100-seat theater and replace it with a smaller one of 300 seats. Another component, a nearby parking garage, would cost about $29 million in city funds and bond financing, Miami Parking Authority CEO Art Noriega said.

According to county Cultural Affairs Director Michael Spring, scaling down the theater would create a more intimate environment in keeping with its dramatic history. It would also distinguish the venue from the many larger local theaters that sprang up since it first opened to the public in 1927, he said.

But last March, the city’s historic preservation board voted to deny the county’s aim to move forward with its plans, reneging on an approval its members passed in 2017. That move set off a series of reversals by local elected officials punctuated by Mayor Suarez’s veto nine days later.

“We must uphold historic preservation requirements in our community, and the Coconut Grove Playhouse should be no exception,” the mayor wrote in a letter explaining his veto. “Based on the record before the [historic preservation board], the County’s proposal would jeopardize the National Register of Historic Places designation for the [playhouse] because the proposal is not consistent with the guidance provided by the Secretary of Interior’s Standards for the Treatment of Historic Properties.”

After lengthy public debates, city commissioners failed to achieve the supermajority vote necessary to overturn the veto. County attorneys then filed suit with the Appellate Division of the Eleventh Judicial Circuit Court to do so on June 17.

“The playhouse is an important part of redeveloping Coconut Grove, and reactivating the playhouse will have an enormous benefit for the businesses and residents there,” Mr. Spring said. “We’re sensitive to that – that this is a large, unoccupied building that’s shuttered and needs to be reanimated.”

While the county is “anxious to go to court and get [the case] resolved,” Mr. Spring said reports that the county has until 2022 to reopen the playhouse to the public or be in violation of its lease are inaccurate.

“Some time ago,” he said, state personnel had audited the lease, asked some “unusually pointed” questions and indicated the state had a different interpretation of its language.

“There was a moment when the state was attempting to read our lease differently, but our answers satisfactorily resolved that,” he said. “There is no deadline in our lease. We have made that clear to the state and anyone that has inquired. But we want to open it as soon as possible. We see no advantage in it staying in its current state.”

Asked if the state agrees that no concrete deadline to open the playhouse exists in the lease, Weesam Khoury, deputy press secretary of the Florida Department of Environmental Protection, declined to comment “due to current pending litigation.”

Mr. Winker said the additional time is a boon to him and his clients, Coconut Grove residents Anthony Vinciguerra and Courtney Berrien, whose home sits 500 feet from the playhouse property.

“It’s given time for us to reshape the debate,” he said. “The reason [the county’s] plan isn’t working is that the plan sucks. The City of Miami hates it.”

In October, he sent the court an amicus brief – a legal document pertinent to a case submitted by a non-litigant party – outlining additional findings and arguments against the county plan.

The brief contains three major points. First, the building’s historic designation was for the entire exterior, not just the portions the county plan would preserve. Second, the “county, as a tenant, cannot demolish 75% of a building they don’t own without permission from the owner, and the State of Florida is saying they don’t approve of the plan,” he said.

Lastly, the “county’s argument that we need to move forward with their plan because nothing is happening and [the] playhouse is just sitting there rotting … is entirely the fault of the county,” he said. “Their plan is not viable because [the] state doesn’t like it and they’re practicing ‘demolition by neglect’ by not taking care of this historic building.”

The county’s reasoning for only wanting to preserve the front of the building, he said, is based on a misinterpretation of the historical report by former Miami and Coral Gables preservation officer Ellen Uguccioni.

In a Feb. 1, 2018, petition, the county asserts that Ms. Uguccioni’s designation report states that “only the south and east façades [of the playhouse] possess architectural significance.”

But according to a transcript of sworn testimony Ms. Uguccioni gave to the Miami Historic and Environmental Protection Board on Oct. 5, 2005, all of the building, not just its frontage and exterior, is historically significant.

“When we designate historic buildings, we don’t just do the envelope or what’s seen from the front,” she said. “[At] the end of the report, I made the statement only the south and east façades are distinctive, which has led [to] people assuming I am saying that only the south and east façades are important and therefore we don’t need to worry about the building envelope itself. I want to make clear … my intent was certainly to include the entire building in the historic designation report.”

Mr. Winker wrote, “It is not surprising that the county attaches only the uncorrected draft designation report and fails to attach either the minutes [or the transcript of the meeting at which Ms. Uguccioni gave her testimony] because the transcript makes clear that the linchpin of the county’s argument, that the author of the designation report concluded that ‘only the south and east façades possess architectural significance,’ is false.”