Advertisement
The Newspaper for the Future of Miami
Connect with us:
Front Page » Opinion » Act in haste on public-private land deals, repent at leisure

Act in haste on public-private land deals, repent at leisure

Alarms rang in Miami when an unstable city commission talked of undoing a riverfront land swap for a new administration building.

The complex deal with a subsidiary of The Adler Group had taken years to hammer together and then pass. Adler had every right to believe a final OK was indeed final and has been acting on that certainty.

Yet a new commission majority moved toward blocking zoning and land use changes that Adler needs in order to make the deal work. Joe Carollo, who is de facto commission leader although not chairman, called the Adler deal the biggest giveaway in city history other than the Marlins Stadium deal of 2009.

So a firm deal faces unraveling. That should not occur, though not because we hold any brief for either the city’s deal or Adler. We don’t. What we oppose is new ground rules after a deal – any deal – is finished.

This one in particular is complex, with the city leasing its outgrown administration building at 444 SW Second Ave. to the Adler subsidiary for 99 years. Adler then would raze the building to construct a four-building riverfront development that includes a larger city office building and three residential towers. 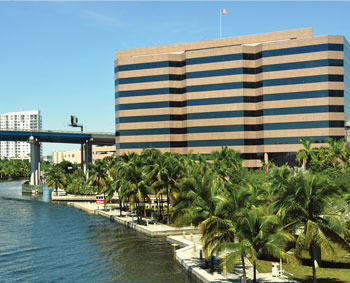 Miami has agreed to lease this riverfront building and land to a developer for 99 years.

Adler is highly reputable. Maybe the city should have gotten a better deal, as Mr. Carollo implies, but there are no after-the-fact do-overs in government contracts.

A requisite of any government is stability based on formal decisions.

Commissions can battle and argue, then delay and argue again. They do it all the time. Debate in democracy is healthy. Hash it all out.

But after a final decision, it’s final, not a starting point for the next round of negotiations and deals. Governments must deal in good faith even if they can somehow skirt legal agreements. Otherwise, credibility in all dealings drains away. Look to federal dealings with Ukraine’s government as a current example.

The public and businesses must be able to count on decisions being final, because all parties base very costly actions on such agreements. Neither civic nor governmental life, nor business, functions well atop a foundation as shaky as jello.

Barring contract failures, fraud, bribery or the like, business agreements with government need to be rock solid. Business must be able to act firmly based on agreements.

Yet in Miami-Dade we’ve watched governments try to abrogate deals with business years later. Often it’s by newly elected officials who weren’t part of a vote on a deal, who decide that it wasn’t good enough and they want to start over.

We’re sympathetic to that. Few business people are totally content years later with every agreement they make. Do-overs later would be wonderful for them – but bad for the business environment.

If, for example, Miami-Dade commissioners could today start over on their 2009 deal to commit almost $3 billion to building Marlins Stadium, the original 9-4 vote for the deal would probably come back 13-0 against. Every commissioner who voted yes later took public heat and many disavowed the deal, saying they’d been conned.

Courts, however, take a dim view of governments backing out of completed deals upon which businesses rely for investments.

The City of Miami in particular was burned when it tried to boot investors out of an ill-considered deal on Watson Island 15 years later. That’s why Commissioner Ken Russell warned during the debate on the Adler lease about trying to kill the deal.

“If there is a majority will of this body to kill the deal, which there may be, there are repercussions to that,” he said, since the city has already leased the land to Adler.

Mr. Russell should know about trying to kill city deals after the fact. In May 2017, the commission passed his motion to find developers in default of their 2002 deal to create Island Gardens on Watson Island. The city sought take back the land. Island Gardens sued for $122 million and a court ruled the city was wrong – so it agreed to pay the developers $20 million in taxpayer funds.

Mr. Russell was correct: the city was in a bad deal of its own making. But once into a deal, good or horrible, it’s a deal – or should be.

The rule of thumb for government is to deliberate long and hard, then negotiate long and hard with the private sector before signing off, because once signed off, it’s a done deal.

Bad thinking and weak negotiating brought the community a perfectly good baseball stadium with horrible terms that never should have been agreed to. One term gave Miami Marlins owners control over soccer not only in the stadium but nearby. That agreement is in force today, shoving soccer away from the Marlins Stadium area.

So the city is instead dealing for a soccer stadium as part of a major development on Melreese, its only golf course – another proposed deal that would soon be regretted but also be irreversible.

Local officials who cheer their own land and development deals with business today may see their successors lamenting the transactions as “giveaways” tomorrow – but odds are those deals will stand unchanged.

Act in haste, repent at leisure.

Could there be a better warning to Miami officials upset today about the Adler deal to stall their bid to hand over Melreese golf course tomorrow for vast development?